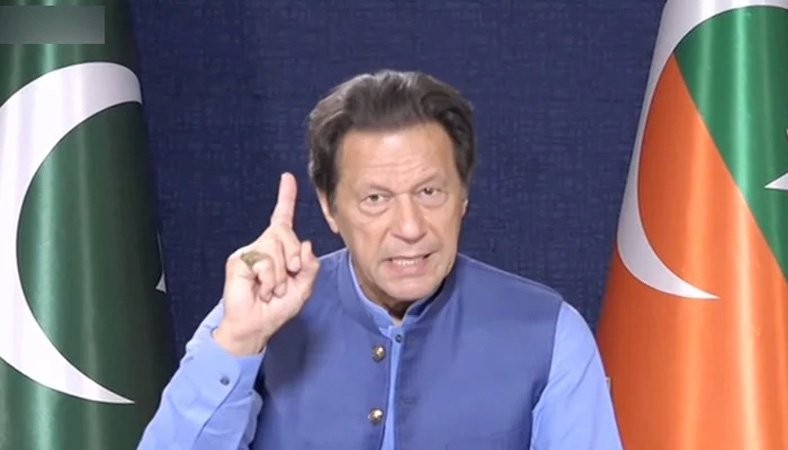 PTI Chairman Imran Khan Tuesday alleged that preparations were underway by the coalition government to rig the by-elections in Punjab scheduled for July 17.

The by-elections will take place in 20 provincial constituencies after the Election Commission unseated 25 PTI MPAs for defection.

Addressing a press conference in Islamabad, Imran said Chief Minister Punjab Hamza Shahbaz will “lose his power in Punjab soon” as he was “illegally ruling the province”.

Talking about the increase in power cuts across the country, Imran claimed that there were no such issues when he was in power. “The PML-N signed the agreements on power project, yet our party did not increase the prices. The PML-N government installed power plants on imported fuels, however, no electricity was being generated and they were paying money for the capacity charges,” he said.

Meanwhile, during a party meeting in which the country’s overall political situation, impact of inflation on the people and the speeches of government allies in the National Assembly were discussed, Imran said the PTI did not shift the burden of global inflation to the people despite the IMF’s strict conditions, weak economy and Covid-19. The meeting also discussed issues related to holding an anti-inflation rally in the federal capital on July 2.

He said the future of the country’s economy under “experienced thieves” was going to be as bleak as the present is under . He directed the party officials to be the people’s spokespersons on the issue of inflation. He added that the “thieves” in the incumbent government had “inflicted the worst suffering on the people in order to provide relief to themselves”. Imran said that the “useless, incompetent, dishonest and infamous group” did not prepare properly, and hurriedly conspired to seize power to save their theft. The ex-premier maintained that when the PTI came into power, the economy was on the brink of bankruptcy, but despite hurdles, it did not pass on the burden of global inflation to the common people. He said the economy could be stabilised by bringing half of the Sharif and Zardari families’ ‘looted wealth’ back.

He said this while referring to the Turn Around Conference (TAC) organized by Planning Minister Ahsan Iqbal with the objective of gathering the nation together to find solutions to the country’s current socio-economic issues.

“You [government] can steer the country out of the crisis by even bringing half of Zardari and Sharif ‘looted’ wealth back to the country,” he said. Besides recovering ill-gotten wealth, the former premier said early elections are also equally important to ensure political and economic stability in the country.

Imran also urged party supporters to stage peaceful protests across the country on Saturday evening (July 2), saying he will hold the historic protest rally against the incumbent government in Islamabad’s Parade ground on the same day. “People are taking to the streets against inflation and power load shedding. They [government] are using force to quell the protests but you cannot stop them through torture,” he added. The ousted premier said the rulers had failed to handle the economic crisis as “they are using their mind to get only NRO [relief in corruption cases] not to resolve the public issues”. Imran blamed the last PML-N government for power outages in the country, saying they installed power plants run on imported fuel. “Now they don’t have enough money to import coal or LNG.”

Citing an example of the Sri Lanka crisis, the PTI chief said in Pakistan political crisis was created by toppling his government which he said led to the economic crisis. “I asked [former finance minister] Shaukat Tarin to tell the ‘neutrals’ [tacit reference to establishment] that the country will pay a heavy price for this instability,” he remarked. “We were overcoming the challenges with great difficulty.” Calling the Election Commission biased, Imran warned the police and bureaucrats against obeying illegal orders of the government, saying they will face legal consequences for their actions.