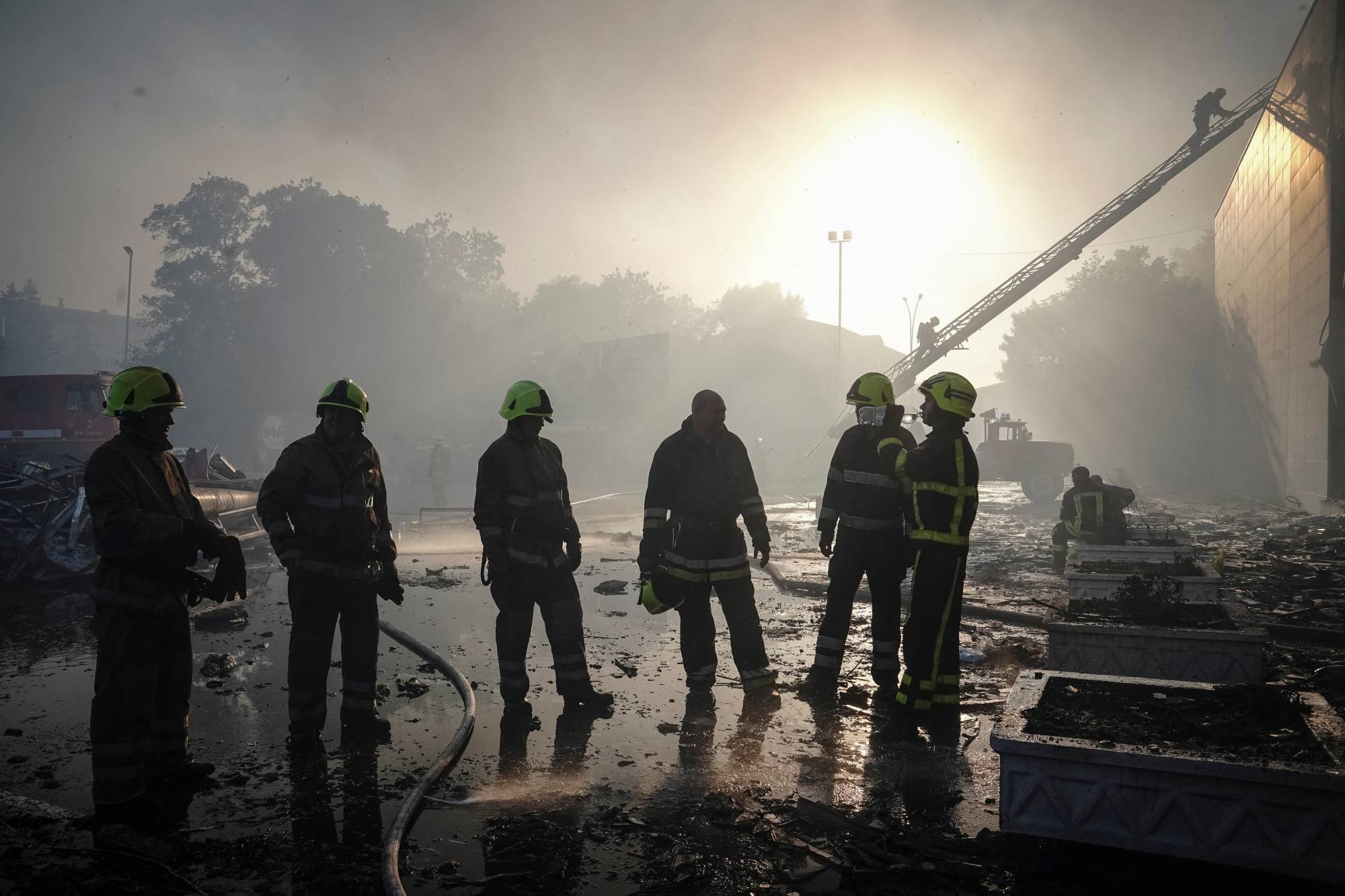 A Russian missile strike on a crowded mall in the central Ukrainian city of Kremenchuk killed at least 16 people, the head of emergency services said early Tuesday, sparking international outrage.

“The Russian strike today on the shopping centre in Kremenchuk is one of the most brazen terrorist acts in European history,” Ukrainian President Volodymyr Zelensky said in his evening broadcast posted on Telegram.

“As of now, we know of 16 dead and 59 wounded, 25 of them hospitalised. The information is being updated,” Kruk said on Telegram.

“All response groups are working in an intense mode,” he said. “The work will go on around the clock.”

“I would like to stress once again: do not neglect air alerts!”

Earlier, Zelensky had said “over a thousand civilians” were in the mall when the missiles struck the city, which had a pre-war population of 220,000 people.

“The mall is on fire, rescuers are fighting the fire. The number of victims is impossible to imagine,” Zelensky wrote on Facebook.

A video he shared showed the mall engulfed in flames, with dozens of rescuers and a fire truck outside.

Emergency services also published images showing firefighters and rescuers trying to clear debris from the smouldering remains of the building.

The Ukrainian defence ministry said the strike was deliberately timed to coincide with the mall’s busiest hours and cause the maximum number of casualties.

“The missile fire on Kremenchuk struck a very busy area which had no link to the hostilities,” the city’s mayor Vitali Maletsky wrote on Facebook.

Dmytro Lunin, the governor of Poltava region where Kremenchuk is located, denounced the attack as a “war crime” and a “crime against humanity”, saying it was a “cynical act of terror against the civilian population”.

“Russia is a disgrace to humanity and it must face consequences,” he wrote on Twitter. Presidential aide Mykhaylo Podolyak accused Russia of being a “terrorist state”. There was also growing international outrage at the attack.

A statement from the G7 leaders gathered for a summit in Germany condemned the missile strike as a “war crime”.

US Secretary of State Antony Blinken said on Twitter that “the world is horrified by Russia’s missile strike today, which hit a crowded Ukrainian shopping mall — the latest in a string of atrocities”.

“Russia’s bombing of a shopping centre in Kremenchuk is an abomination,” French President Emmanuel Macron wrote on Twitter in English.

“We share the pain of the victims’ families, and the anger in the face of such an atrocity. The Russian people have to see the truth.”

Below the tweet, video footage of the blazing shopping centre, black smoke pouring from it, was posted.

A Russian missile strike on a crowded mall in central Ukraine killed at least 16 people Monday in what Group of Seven leaders branded “a war crime” at a meeting in Germany where they looked to step up sanctions on Moscow.

The leaders vowed that Russian President Vladimir Putin and those responsible would be held to account for the strike in the city of Kremenchuk, carried out during the shopping mall’s busiest hours.

“Indiscriminate attacks on innocent civilians constitute a war crime,” they said in a statement condemning the “abominable attack.”

Ukraine accused Russia of deliberately targeting civilians, with President Volodymyr Zelensky calling it “one of the most brazen terrorist acts in European history” in his evening broadcast posted on Telegram.

“A peaceful town, an ordinary shopping centre — women, children ordinary civilians inside,” said Zelensky, who earlier shared a video of the mall engulfed in flames with dozens of rescuers and a fire truck outside.

“All response groups are working in intense mode,” Kruk said. “The work will go on around the clock,” Kruk said on Telegram.

In separate attacks Monday, Russian rockets killed at least eight civilians as they were out collecting water in the eastern city of Lysychansk, said Lugansk region governor Sergiy Gaiday.

And a strike in Kharkiv killed four people and wounded 19 others, including four children, said Oleg Synegubov, head of Kharkiv’s regional administration.

“The enemy is deliberately terrorising the civilian population,” Synegubov said in a statement on Telegram.

US Secretary of State Antony Blinken said the world was “horrified”, while UN chief Antonio Guterres’s office condemned the strike as “totally deplorable”.

French President Emmanuel Macron denounced the attack as an “abomination”.

Diplomats said Ukraine requested a Tuesday meeting on the strikes at the UN Security Council, where Russia wields veto power but has not been able to prevent critical discussion of the invasion it launched on February 24.

US President Joe Biden and his peers from the wealthy Group of Seven nations are seeking to tighten the economic screws on Moscow, even as soaring energy and food prices drive up global inflation.

“We will continue to provide financial, humanitarian, military and diplomatic support and stand with Ukraine for as long as it takes,” the G7 said in a statement on the summit’s second day.

Zelensky, addressing the leaders virtually, had urged them to “intensify sanctions” to help end the war before the bitter winter.

“We will continue to increase pressure on Putin,” summit host German Chancellor Olaf Scholz said in response. “This war has to come to an end.”

To help bring down surging prices, France urged oil-producing nations to raise output in an “exceptional manner” and Macron backed a return to the market of crude from Iran and Venezuela, both under US sanctions.

On Sunday, the G7 announced plans to stop imports of Russian gold.

The summit of the G7 — which comprises Britain, Canada, France, Germany, Italy, Japan and the United States — ends Tuesday and will be immediately followed by a NATO meeting in Spain.

Ukraine is again expected to dominate the agenda.

NATO said Monday it would boost its high-readiness force from 40,000 to 300,000 troops and send more heavy weaponry to its eastern flank.

NATO Secretary-General Jens Stoltenberg called it “the biggest overhaul of our collective defence and deterrence since the Cold War”.

Lithuania, a NATO member at the forefront of pressuring Russia, announced it had been targeted Monday by a massive cyberattack.

The Russian hackers’ group Killnet claimed responsibility, saying it was acting in retaliation for restrictions imposed by Lithuania earlier in June.

Russia last week threatened reprisals against the Baltic state for having banned the rail transit of certain goods to the Russian exclave of Kaliningrad. Vilnius said it was simply applying European Union sanctions.

Since failing to capture Kyiv early in the war, Russian troops have focused on the eastern Donbas region, where they have been gaining ground.

Russian shelling has continued in and around the eastern city of Lysychansk, after Russian forces at the weekend took its twin city, the industrial hub Severodonetsk, after weeks of fierce fighting.

Taking Lysychansk would give Russia control of the entire Lugansk region of the Donbas.

Sweeping Western sanctions designed to choke off Moscow’s access to the international financial system have pushed Russia closer to its first foreign debt default in a century.

Russia said Monday that two of its debt payments had been prevented from reaching creditors after a key deadline expired.

But “there are no grounds to call this situation a default”, Kremlin spokesman Dmitry Peskov said.