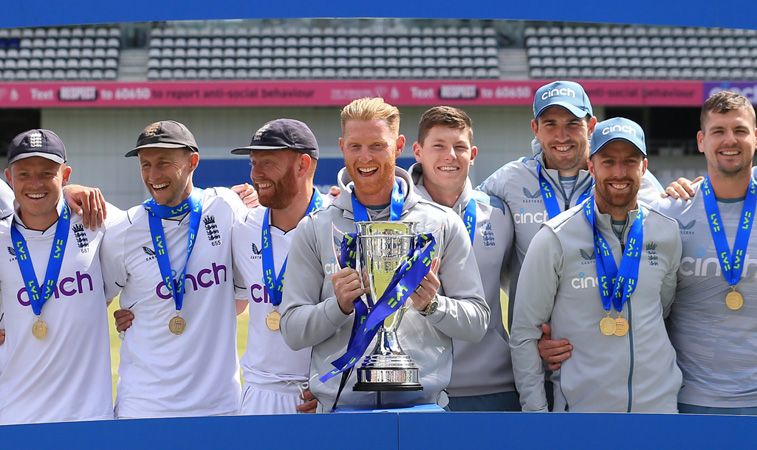 LEEDS: Jonny Bairstow led England to a whitewash of Test world champions New Zealand with a stunning fifty on his Headingley home ground on Monday. Bairstow made a blistering 71 not out, England’s second quickest Test fifty of all time, to follow a majestic 162 that helped revive the hosts from a first-innings collapse after they had slumped to 55-6. Former captain Joe Root, largely reduced to the role of a spectator by Bairstow, was 86 not out after sharing a partnership of 111 with his Yorkshire team-mate, having started the day unbeaten on 55. England reached their target of 296 with just three wickets down to complete a 3-0 series clean sweep in a first campaign under their new leadership duo of captain Ben Stokes and red-ball head coach Brendon McCullum, a former New Zealand skipper.

Rain washed out the morning session to leave England, 183-2 overnight, with a nominal 78 overs in which to score the remaining 113 runs they needed for victory. But they took just 15.2 overs, scoring at a rapid rate of 7.43 an over, with Bairstow sealing victory in storybook style with a six off spinner Michael Bracewell. Ollie Pope, 81 not out overnight, was bowled off the fifth ball of the day by Tim Southee to end a sparkling stand of 134 with Root. But that was as good as it got for New Zealand, with Trent Boult’s first over of the day costing 17 runs.

Bairstow came into this match having made a remarkable 136 during England’s victorious run chase in the second Test. His purple patch continued Monday as he got off the mark with two boundaries off successive deliveries from left-arm quick Boult. Bairstow then ‘picked’ a slower ball from Southee as he disdainfully drove the Black Caps spearhead for six.

He was equally severe on Bracewell, preferred to frontline spinner Ajaz Patel, sweeping the off-break bowler’s opening ball of the day for four before driving him for six. Bairstow then completed England’s second-fastest fifty when he drove Southee for a sixth four in 30 balls faced. Only outstanding all-rounder Ian Botham, with a 28-ball half-century against India at Delhi in 1981, had made a quicker Test fifty for England. New Zealand made 326 in their second innings, Tom Blundell top-scoring with 88 not out and Daryl Mitchell making 56 as the pair shared their fourth century partnership this series.

Mitchell finished the series with a record total of 538 runs, the most scored by an overseas batsman in a campaign of three or fewer Tests in England, including three hundreds, at a huge average of 107.60. But after he was dismissed on Sunday, player of the match Jack Leach mopped up the tail on his way to 5-66 for a match return of 10-166 — the first time the left-arm spinner had taken 10 wickets in a Test. A year ago, England did not attempt to chase a target of 273 in a first Test draw with New Zealand at Lord’s during a two-match series they lost 1-0. But they have become a transformed team under Stokes and McCullum, with England chasing down stiff targets of 277 and 299 earlier in the series while recording five-wicket wins at both Lord’s and Trent Bridge. England will not have long to rest on their laurels, however, with the Covid-delayed final Test of last year’s series against India starting at Edgbaston on Friday