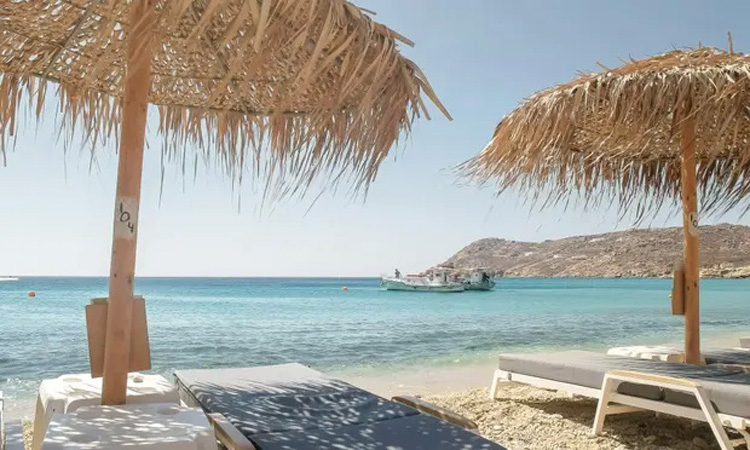 Corfu is the northernmost island on the blissful Ionian. On its east coast, two mighty Venetian-era fortresses guard its Unesco-listed eponymous capital. Here cobbled alleys reveal pastel-coloured palazzi, quaint churches, old-fashioned cafes and traditional tavernas serving local fare. Its centrepiece is the Liston, an arcaded walkway overlooking the vast green Spianada, where locals play cricket on summer evenings – a custom dating from the 19th century, when Corfu was a British protectorate for a period of almost 50 years. Beyond Corfu town, the coast yields to translucent waters, and sand and pebble beaches. The rugged interior is planted with olive groves, many dating back more than half a millennia, from which Corfu produces some of Greece’s best olive oil. Hike the lower slopes of Mount Pantokrator, to Old Perithia, a village of 14th-century stone cottages, some now restored, to see how rural life once looked.

Just over seven miles north of the city of Corfu is Kommeno, a lush peninsula, clad with silvery-green olive groves, fragrant pines, elegant cypresses and exotic palms. Here the five-star Grecotel Corfu Imperial offers the island’s most opulent accommodation. Expect refined rooms, suites, bungalows and waterside villas with private pools sleeping up to 12 guests. Each is unique, some built in minimalist contemporary style, while others borrow from Corfu’s lavish Venetian tradition, with pastel-coloured facades, balustraded balconies and terracotta-tile roofs. Guests can explore the resort’s rocky coast, interspersed with secret bays and beaches, and the landscaped gardens dotted with pools. On the main promenade is a choice of bars and restaurants serving fresh seafood and local seasonal produce, as well as the island’s cherished olive oil.

Rising from the Aegean, the island of Mykonos is renowned for its hedonistic nightlife. Cosmopolitan Mykonos town is a warren of cobbled alleys, where whitewashed cubic houses, typical of the Cyclades, host cocktail bars, gourmet restaurants and chic boutiques. By day, glamorous sun-tanned guests snooze and bathe at the glorious long beaches of the south coast – and for sporty types, there’s also windsurfing, kite-surfing, waterskiing and scuba diving. After dark, several beaches host open-air dance clubs staging well-known DJs. From the harbour, daily excursion boats run to the rocky islet of Delos. Believed by the ancients to be the birthplace of Apollo (God of the sun) and Artemis (goddess of the moon), today its temples and proud stone lions are Unesco-listed.

Overlooking the gorgeous Psarou beach on Mykonos’s sunny south coast, the Grecotel Mykonos Blu is the perfect summer escape. It has a lush spa and a sleek cave-like infinity pool built into the rocks. From here, steps lead down to the golden sands, and hotel guests get free sunbeds and beach towels. The hotel comprises bungalows, suites, and villas with sea views and private pools, inspired by traditional Cycladic architecture. Think Aegean-cool interiors, predominantly white with discrete blue details. Wake up to a generous Greek breakfast, enjoy a light sushi lunch, and close the day with a romantic sunset dinner on the beach, with a private waiter and personalised menu planning.

Kos town is known for its palm-lined avenues, big sailing marina, and the 15th-century Castle of Nerantzia, which guards the entrance to the port. Behind the town stands the hillside Asklipeon, a third-century BC sanctuary and healing temple. It was built in honour of Hippocrates, regarded as the father of medicine, who was born on Kos in 460BC. His famous tract, On Airs, Waters and Places, examined the relationship between health and environment – he believed we thrive on a good diet, fresh air, rest, exercise, cleanliness and a mild climate. Hippocrates would probably have approved of the eight-mile cycling lane that runs along the seafront in Kos town, from Psalidi beach to Faros beach. Much-loved by wind- and kitesurfers, Psalidi enjoys a steady side-shore wind, and has several windsurfing and kitesurfing schools, offering tuition and rental equipment. In the western part of the island, Plaka Forest is a haven of pine trees, fresh spring water, terrapins and dozens of peacocks – kids adore it.

In a spectacular location just outside Kos town, you’ll find the family-friendly Grecotel LUX ME Kos Imperial. Lying near Psalidi beach, it’s set in landscaped grounds with exotic tropical planting, freeform pools with cascades, a turquoise lagoon and a pebble beach. Outdoor activities include yoga, pilates, tennis, beach volley, windsurfing and scuba diving. There’s also a lush spa offering a wide choice of health and beauty treatments and an indoor heated pool, and an array of waterside bars and restaurants serving healthy Mediterranean menus and special options for kids. Accommodation ranges from elegant rooms and suites to bungalows and villas, all decorated to create a suitably leisurely island mood.

Some 5,000 years ago, there lived a sophisticated civilisation on Crete called the Minoans. Their main settlement was Knossos Palace, where they enjoyed beauty and leisure – the ruins of which you can still visit today. Built around a vast central courtyard, its rooms were decorated with magnificent frescoes, depicting the curious sport of bull leaping, as well as dolphins, blue birds and lilies. It also had storerooms for gigantic amphora – ceramic storage vessels – filled with olive oil and wine. The fields surrounding the site still support lush vineyards, some reviving almost-forgotten indigenous grape varieties.

Nearby, on the coast, Heraklion was originally Knossos’s port, and in the 15th century it was fortified by the Venetians, who also added elegant churches and fountains. At Heraklion Archaeological Museum, you can see ancient finds from Knossos, such as frescoes, painted ceramics and gold jewellery. Inland there are dramatic mountains – the ancients believed that Zeus, king of the gods, was born in a cave on the highest, Mt Ida (2,456m).

Set amid careful landscaping with pools, a lagoon and blissful beaches, the Grecotel Amirandes lies on Crete’s north coast, 14 miles east of Heraklion. A family-friendly resort, it offers activities associated with a healthy, active lifestyle that the Minoans would have admired. On-site you have yoga, aerobics, tennis and kayaking, plus nearby scuba diving and mountain biking. Sophisticated dining options include Italian and East Asian fare, but the highlight is rustic Cretan cuisine, prepared from fresh local ingredients and organic produce from Grecotel’s own Agreco Farm. Accommodation ranges from rooms and suites to bungalows and villas – the best come with a private garden, infinity pool, and direct access to the sands with private beach cabanas.