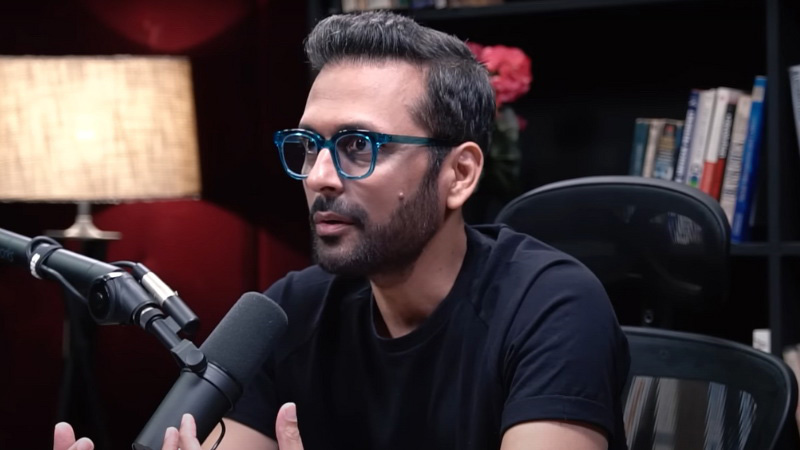 There’s a lot more to singer Bilal Maqsood than his “simple” life, black shirts and basic watch on his wrist. The singer opened up in a podcast with Junaid Akram about the beginning of his band Strings, the memories attached with it and the standard of musicians today.

On Saturday, the episode aired on YouTube where the singer not only talked about how he met his wife but also music today and why bands like U2 and Coldplay are struggling. He compared Strings with U2 and how that was the direction they were going for but unfortunately, according to him, not everyone is able to reach that point or goal. Maqsood said that at a time like this, even U2 must be thinking about how to entertain the new generation and how to re-invent themselves. “Look at Coldplay. They collaborate with younger artists just to stay relevant. Now they’ve said that after 2025 they won’t be making new music but will perform at concerts. Maybe they’re also feeling tired. How much can they do?

“According to us, everything is glittery and shiny but they know what they are going through and it’s not an easy journey for a musician who is constantly thinking about what they have to do next. The world’s changing and for the underdogs, the world right now is ideal because the audience is surfing the internet and they are searching for people that they can own and discover.” He said that ownership is very important at this time and as soon as you become big, you lose the ownership of the audience because you’re on a different level. Your audience then looks out for new people. “For big bands and names it becomes difficult and for indie artists the world today is a playing field.”

In response to a question by the host about collaborations with junior artists and the growing trend of an artist being equated with their best work, Maqsood explained why his and Faisal Kapadia’s band called it quits. “Me and Faisal used to always discuss that we shouldn’t reach a point where we both are in denial that we are still big because in our career of 33 years we’ve seen so many people going through that phase where they feel that they are on top and someone is a junior to them. You can’t snatch respect. We always discussed that we won’t let our band come under the spotlight for wrong reasons, even if it was for selfish reasons such as getting money.”

Maqsood is grateful for the lockdown and credited it for making it easy for him and Kapadia to make a decision about their band. He said that after six albums together, hosting four seasons of Coke Studio and live concerts they started to think if it was the end for their band. “We questioned that we’re at this age where we should explore our lives and what we want to do next, because now we have the chance to get out of that box and explore something new. We took that decision in five seconds. Faisal was saying that we should take a gap for two years and I told him the world’s changing, so after losing that time, there is no point in returning considering how much time and money you’d put on the line. Then both of us agreed and came to a decision to end Strings.”

While talking about the band, he was also asked about his experience in India. “India completely changed our lives in the sense that when we released Duur in Pakistan, people were not able to understand it at first. It wasn’t an instant hit. At that time Haroon’s ‘Yaara’ released at the same time as us. It was an era where Jawad Ahmad, Hadiqa Kiani, Shehzad Roy, Abrarul Haq and Jawad were the top artists, the highest paid was Abrar. Even Junoon used to take less than Abrar because people loved Punjabi music. So now in that time comes a song called ‘Duur’ and people were not able to understand it. ‘Anjane’, ‘Duur’, ‘Jane Do’, ‘Kuch To Ho Gaya’ – people were not able to understand it. But then when we went to India, we were offered by all the labels there, because these were the people who were in college when our song ‘Sar Kiye Yeh Pahar’ was released.” He said that ‘Sar Kiye Yeh Pahar’ was a major hit across the border and they got to know through Doordarshan that had sent them a letter asking for the rights to air it on TV. “In all of the clubs across India, there was ‘Sar Kiye Yeh Pahar’ getting played. There were people that came up to us and showed us their pirated version of our album so when our album released, these people were working in those labels. For two months we promoted Duur all over the media and upon our return, when I went to a shop near my house, the guy said ‘sir hum aap ke gaanay dekhte rehte hain [sir we watch your songs]’. In those two months, everything changed.”

When asked why people like Atif Aslam aren’t Atif or Rahat Fateh Ali aren’t Rahat until they go to India, Maqsood said the only reason one feels validated across the border is because India is willing to spend money on artists, whether the song is filmy or pop. “That doesn’t mean a stamp from India will always kickstart your business or work – it doesn’t work all the time. Only the ones that have the power come back even stronger.” The host also asked Maqsood about the time when the song ‘Najanay Kyun’ made it to Spiderman in an era where artists weren’t easily tracked down as they are today through applications like YouTube, Twitter etc. “We had made a deal with Sony Music for our album at that time. Columbia TriStar had approached Sony India as they wanted an Indian band to make a song for the movie. At that time Sony pitched that this is their band and this is the album. The song selection was done by them and we got the approval that the song had been selected.” “When we got the call about this news, me and Faisal were returning from a concert in Delhi and were heading by road to Jaipur. All calls were always attended by Faisal so when this happened I Faisal kept on saying “nahi nahi [no, no]” up until he told me and then we decided we won’t tell anyone. Our wives knew but no one else had any idea about this. We were waiting for approval after the music video was shot and that took about three months, we kept it a secret from everyone.”