* Olivia, who has been spotted dancing away at his recent concerts, also showed some subtle support for his new album last month 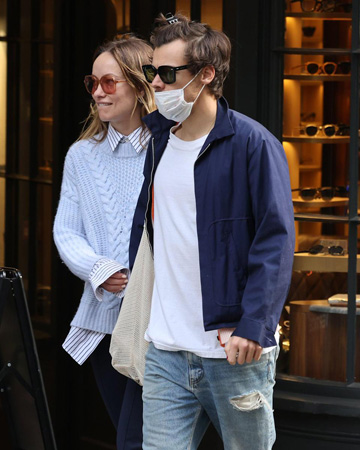 Harry Styles and Olivia Wilde are doin’ some more late night talking. The couple stepped out for an evening stroll in North London on June 6, keeping bundled up in beanies during the nighttime walk.

Harry, 28, wore a blue tracksuit and Green Bay Packers hat while holding hands with his director girlfriend in Hampstead. Olivia rocked a bomber jacket emblazoned with the name “Otis” on the back, which sweetly paid tribute to the 8-year-old son she shares with ex Jason Sudeikis.

The singer, who recently headlined Coachella before dropping his third solo album Harry’s House, seemed to be enjoying a break from his Love on Tour series, which continues June 11 in Glasgow, Scotland, before he heads to Manchester and London in the U.K.

Olivia, who has been spotted dancing away at his recent concerts, also showed some subtle support for his new album last month. On its release date, she shared an Instagram Story featuring his song “Music For A Sushi Restaurant” set over a clip from the 2018 movie Cold War. The 38-year-old captioned the shot with a hands raised emoji to express her pride.

Fans have already been speculating which of Harry’s new heartfelt lyrics could potentially refer to their romance. But the One Direction alum has been keeping his cards close to his chest.

He coyly teased his songwriting process during a recent appearance on The Howard Stern Show, saying after the DJ asked him how he presents his music to his girlfriend, “When I write songs, they kind of start out just, I guess, mine.” He explained, “I think it’s important to write from what you’re going through at the time and trying to turn life into what you make. I guess it’s like, the most you can kind of capture a moment is kind of being true to that.”

Howard followed that up by asking about the couple’s experience falling in love on a movie set, referring to their upcoming thriller Don’t Worry Darling.

“Oh wow, how to answer this question?” Harry teased back. “I had a wonderful experience being directed by Olivia. I think there is something that obviously…acting is kind of very uncomfortable at times. I think you have to trust a lot.”