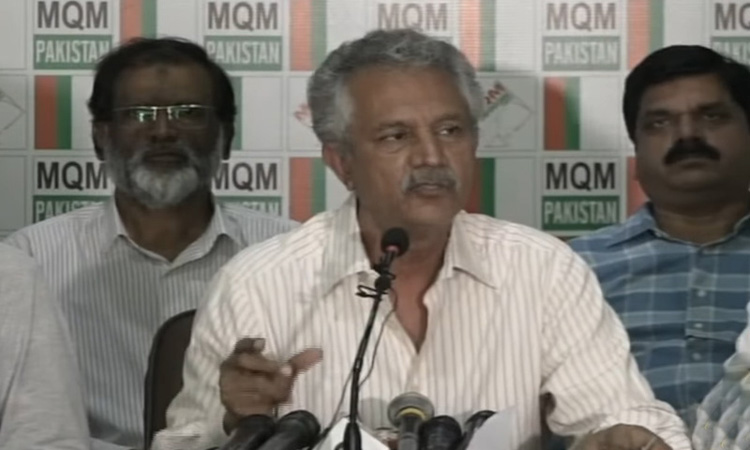 MQM-P leader Wasim Akhtar Monday accused the PPP of stealing his party’s mandate during the first phase of local government elections in Sindh in violating of an agreement, warning the PPP of ending the agreement they had struck for ousting the PTI led-government.

The ruling PPP and the MQM-P had signed a deal in March this year with the former assuring the latter of meeting all its years-old demands if it supported the opposition alliance to oust the then ruling government through a no-confidence motion.

The demands of the MQM-P agreed upon under the deal range from municipal government structure to future power-sharing formula and recruitment policy in Sindh to local policing system. The first point of the agreement named the Charter of Rights was directly related to the Sindh local government, in which the two sides had agreed that the decision of the Supreme Court regarding local governments in a constitutional petition filed by the MQM-P would be “implemented in letter and spirit within one month and with the mutual agreement”.

Addressing a press conference in Karachi, Wasim recalled that his party’s agreement with the PPP categorically said both sides will accept and protect each other’s mandate.

“This is one of the core points that were violated by the Sindh government in LG elections in 14 districts,” he lamented. Akhtar claimed that in several areas MQM-P candidates were in the lead with a “good margin” but the results had been withheld.

He urged Sindh Chief Minister Murad Ali Shah to hold a meeting with the Election Commission of Pakistan and review delimitations.

Wasim said the ECP will be responsible if elections were held in a similar way in Karachi and Hyderabad “with no government in sight to stop electoral mismanagement and robbing of mandate”. Polling for the second phase of the LG election in the two cities will be held on July 24.

He urged Prime Minister Shehbaz Sharif to look into the matter, regretting that “Karachi has been counted as half [its actual size in census] and there can be no greater injustice than this.” Lambasting the ECP, Akhtar also warned of “severe mismanagement and chaos” in the general elections of 2023 if the ECP did not take “timely measures” to address the problems arising in the local government elections.

He said his party had exhausted all the options to get Karachi its due rights. “Should we now approach Russia and China to urge them to resolve our issues?” the ex-mayor asked. He said he trusted the words of PPP Chairperson Bilawal Bhutto Zardari wherein he had assured MQM-P of resolving its issues. “Then why is the implementation of the commitment being delayed,” he wondered. Meanwhile, the Jamiat Ulema-i-Islam-Fazl and the Grand Democratic Alliance (GDA) also rejected the results of the local government elections, which placed the PPP at the top, saying that they would stage a protest outside the ECP’s provincial office on June 28 (Tuesday).

Speaking in a press conference alongside GDA’s General Secretary Dr Safdar Abbasi, JUI-F’s Rashid Mehmood Soomro claimed that he had been voting at a particular polling station for years but this time round his name was not included in the voter list.

He said Sunday’s election was marred by violence and rigging. Yesterday, ballots were being stamped till 10pm in our union committee, he said, adding that two terrorism cases were registered against a party candidate. He maintained that even though JUI-F garnered the second highest number of votes, the party still rejected the results. He said that in such a situation, the JUI-F had started consultations with other parties which could perhaps lead to a boycott of the second phase of the local government elections.