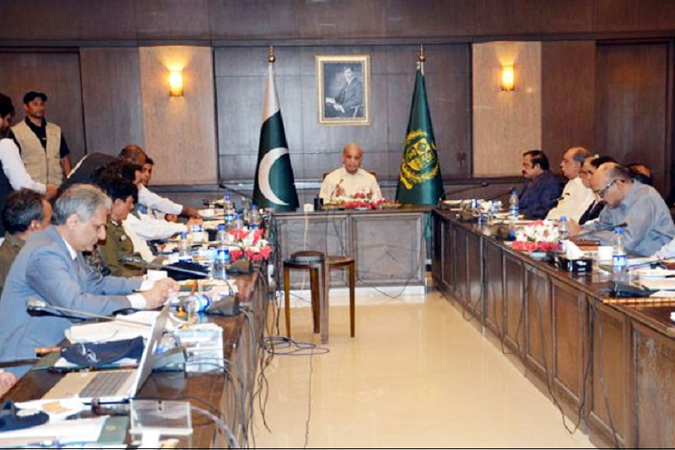 Prime Minister Shehbaz Sharif Sunday decided to revive the role of provinces in implementing the National Action Plan (NAP) in order to eliminate terrorism in the country.

The prime minister chaired a meeting in Lahore to review the overall security situation in the country. Shehbaz was briefed on the law and order situation in the province, terror threats as well as the measures being taken to curb the scourge.

Ignoring province in implementing the NAP during the last four years had led to the rise in terrorism, the prime minister said. He said public opinion could only be turned in favour of the police and law enforcement agencies by showing performance. He said it was inevitable to ensure law and order in the country for revival of the national economy and country’s development.

Expressing concern over the rise in street crimes in Punjab, Shehbaz directed the provincial governments to take measures for protection of lives and properties of the people. The meeting also reviewed implementation of the steps to eliminate the sources of terror financing and relevant laws.

The prime minister appreciated the performance of the law enforcement agencies regarding the fulfilment of the Financial Action Task Force (FATF)’s action plan. He said the whole nation was united against terrorism and stood side by side with the country’s armed forces. “Our struggle will go on till the elimination of terrorism. The government will never compromise Pakistan’s security and defence,” he remarked.

Meanwhile, in a message on the International Day against Drug Abuse and Illicit Trafficking observed on Sunday, Prime Minister Shehbaz Sharif assured that the government was making efforts to eradicate the challenges posed by the rising trend of the use of illicit drugs among youth.

“We are working closely with international organizations for the purpose,” he said.

The premier said Pakistan was a signatory to all global conventions and protocols for the prevention of drug abuse and illicit trafficking.

He said that the general public, especially the youth, which made up to more than 60% of Pakistan’s population, was at a huge risk due to easy availability of synthetic drugs.

He called for a collective effort to shield the youngsters against the hazards of drug abuse and protect their health and well-being. “On this International Day Against Drug Abuse and Illicit Trafficking, we reaffirm our commitment to proactively limiting drug abuse and illicit trafficking. I would direct the Ministry of Narcotics Control to take effective measures to promote safer, drug-free communities and address the challenges of illicit drugs,” he said.

The prime minister urged the media and civil society organizations to play their role in raising awareness to undertake the mission of achieving drug-free Pakistan while the government does its part. “Preventing drug use before it begins is the most cost-effective, common-sense approach to promote safe and healthy communities,” he added.

Meanwhile, the premier has annonced hosting a dinner for all political parties’ MNAs as well as allies on Monday to consult about the economic condition of the country. PM Shehbaz will also brief the participants on talks with the IMF. Sources said that PM would seek suggestions from the lawmakers to tackle inflation and other economic challenges.