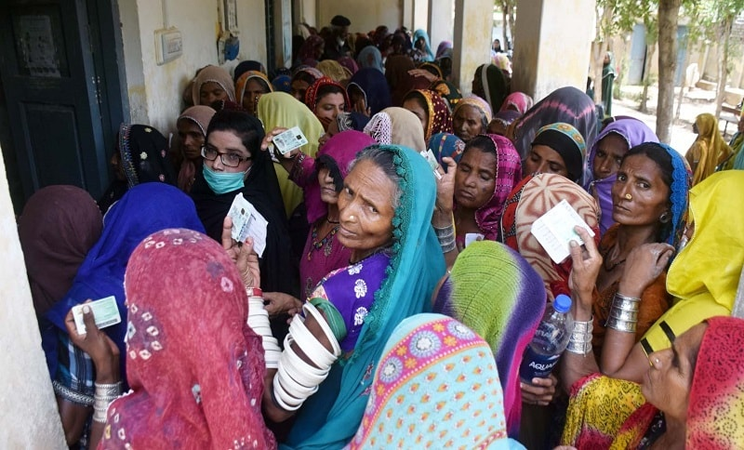 Two died and at least a dozen were injured as violence – including firing and scuffles – marred the first phase of local bodies elections in Sindh on Sunday.

The voting process ended for the first phase of local government elections in 14 districts from four divisions of Sindh on Sunday and the counting of votes was underway amid reports of violence.

The polling began at 8am and continued until 5pm without pause. The Election Commission of Pakistan (ECP) extended the voting time in areas where polling was stopped for some reason. The 14 districts of Sindh include Larkana, Kambar-Shahdadkot, Shikarpur, Jacobabad, Kashmore, Sukkur, Ghotki, Khairpur, Naushero Feroze, Shaheed Benazirabad, Sanghar, Mirpurkhas, Umerkot, and Tharparkar.

While polling began in the morning in all 14 districts, reports of violence, scuffles and ECP’s mismanagement started pouring in from upper and lower Sindh regions. These clashes were said to emerge out of missing election symbols as well. Polling remained suspended at various polling stations as of 4pm. By Sunday afternoon, two deaths were reported – one each in Sanghar and Sukkur – which were confirmed by police. The deceased in Sanghar’s municipal constituency was the brother of a local PTI leader. “I can confirm death of Qaiser, brother of our party’s candidate Asghar Gandapur in Tando Adam. Qaiser has been subjected to violence which caused his death,” claimed Mushtaq Junejo, divisional president PTI from Tando Adam. Qaiser’s brother Zafar was contesting on ward-13 of municipal committee Tando Adam. The killing sparked a protest as supporters blocked the Tando Adam road. In Naushero Feroze, voting was stopped temporarily when clashes erupted between two rival groups. At least four people were injured.

A clash also took place between two political parties in UC Trihmar in Tharpark District, according to the police. It added that both the groups had baton-charged each other.

While two candidates also fought each other in the Tehsil Kloi, leading to a few people being injured.

Meanwhile, violence between two political groups killed one person at a polling station of Tando Adam’s Municipal Committee Ward 13. The clash also injured a candidate along with 12 others.

In Kandhkot, opponents attacked the vehicle of JUI-F leader and candidate for the municipal committee, Shoukat Malik, with batons, and broke the windscreen. In addition to this, the ECP directed the deputy commissioners and DROs to take action over snatching election material at three polling stations in Shaheed Benazirabad District.

The central spokesperson for JUI-F slammed the ECP for its failure to fulfill its duties, adding that their party workers were targeted and the police were silent spectators.

At least 13 people involved in riots were arrested in Pano Aqil, said a spokesperson for the ECP. He maintained that an attempt to stop the election was foiled in a timely manner.

Referring to the misprinting in the ballot papers, the MQM-P leader raised questions about the performance of the ECP. Pointing out the low turnout, Akhtar said that voters were frightened due to the firing, adding that fair elections could not be possible in this situation. “Local body elections in Nawabshah and Mirpurkhas should be stopped as rigging is in full swing in these areas,” he demanded.

In addition to this, he asked the ECP to remove flaws in voter lists and revise the delimitation.

“The elections are a question mark on the PPP,” he added.

PTI’s senior leader Ali Haider Zaidi warned that the Sindh government and the ECP would be responsible if the situation worsened in the province.

Fearing bloodshed amid the democratic process, he said that PPP used government machinery during its election campaigning, adding that Foreign Minister Bilawal Bhutto-Zardari and Sindh Chief Minister Murad Ali Shah “violated the ECP’s laws by staging a public meeting in Larkana”. “Have the ECP served notices to Bilawal Bhutto and Murad Ali Shah?” asked the PTI leader. It is pertinent to mention that the Election Commission had established 9,023 polling stations, including 1,895 for women, to facilitate over 11 million registered voters.

According to a spokesperson for the ECP, Chief Election Commissioner (CEC) Sikandar Sultan Raja was monitoring the polling process in the province. PPP leader and former minister Owais Qadir Shah raised questions over the performance of the ECP, saying the voter registration data were “incorrect”. He asked the election organizing authority to take notice of the alleged irregularities at the polling stations. PPP Senator Taj Haider also requested the chief election commissioner to extend the polling time in 14 districts of Sindh by two hours and allow the polling process till 7pm. Statics suggest that out of 887 seats for union councils and union committees, candidates have won unopposed on 135 seats, and now there is a contest between 3,190 candidates for the remaining 752 seats.

Moreover, of the 694 seats for ward councillors of town committees, 68 candidates have won unopposed and 3,225 candidates are contesting for the remaining 626 seats.