Arooj Aftab and Badshah collaboration on the cards? 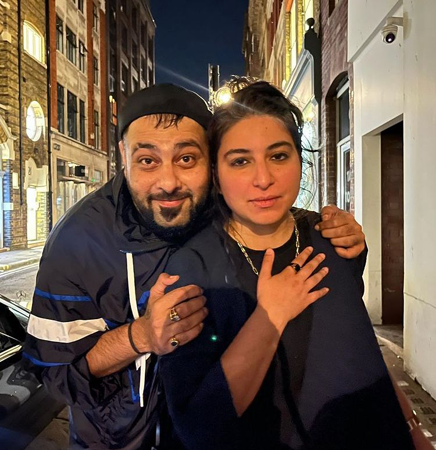 The ‘Muhabbat’ singer who made Pakistan proud with the first-ever Grammy win for the country earlier this year, took to her Instagram handle on Thursday and shared a bunch of pictures with the ‘Jugnu’ rapper.

“Epic night with @badboyshah @bobbyfricton @asifkhan.now,” Aftab wrote in the caption of the three-picture gallery on the photo and video sharing application, which has music enthusiasts speculating a yet another cross-border collaboration.

The speculations were further fuelled by Bobby Friction – a DJ and radio-TV presenter – who was also tagged in Aftab’s Insta post. On his official account, the artist shared a picture of the trio captioned with ‘Arooj Aftab x Badshah’.

“What I love about the UK is we can pull down the line of control metaphorically speaking when we need to,” he noted further, hinting at the collaboration on the cards.

Meanwhile, in another post on the micro-blogging site, Bobby Friction asked his followers for the name suggestions of this ‘new brown band’. On the work front, Aftab is currently on a concert tour with musicians Petros Klampanis, Darian Donovan Thomas and Maeve Gilchrist, while she also performed at UK’s Glastonbury festival on Friday.

On the other hand, Badshah dropped his new track ‘Tauba’ on Friday.