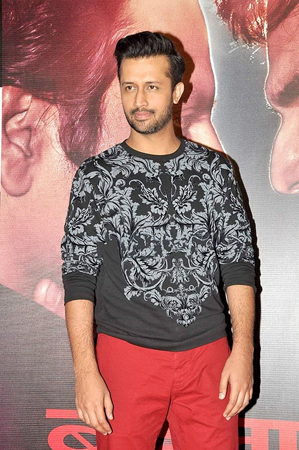 The new track of Atif Aslam for the upcoming Hindi Punjabi movie, Rangreza, has received massive views within a day of its release on YouTube. The film titled ‘Lover’ will be released on 1st July. With the release of the song, Indian fans trended ‘Welcome Back Atif Aslam’ on Twitter. The song has crossed two million views in less than 24 hours. It was released on 24th June. Indian fans say Atif Aslam has united two nations. Some called him a ‘legendary singer’.

The film Lover is a Geet MP3 presentation, produced by KV Dhillon and Parvar Nishan Singh and co-directed by Dilsher Singh and Khushpal Singh.

Atif Aslam has a massive fan base on both sides of the border. He has a long career singing in Bollywood. One of his Bollywood songs, Dil Diyan Gallan, pictured by Salman Khan and Katrina Kaif, was a tremendous hit.

According to the latest data released by Spotify in February this year, Pakistan’s Atif Aslam has become the most-streamed Pakistani singer internationally. Spotify, the world’s leading music streaming platform released the list marking a year of its entry in Pakistan. According to Spotify, over 19, 590 songs had been added to the platform from Pakistani creators.

Spotify operates in 184 markets with 406 million followers. Pakistani songs are mostly streamed in India, the United States, and the United Kingdom.