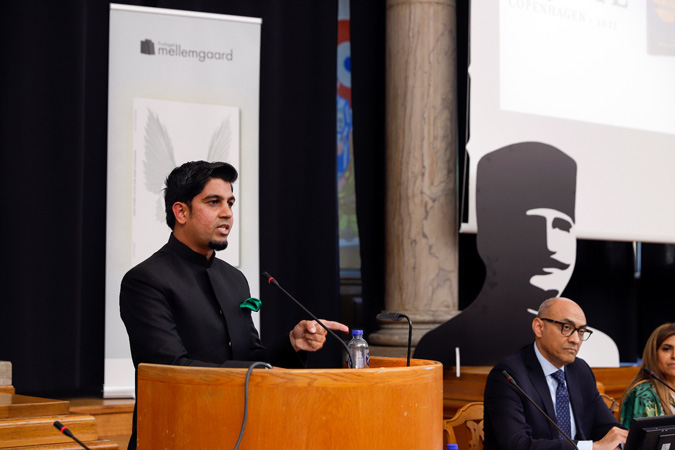 Khurram Ellahi’s book titled “Mankind Encountering Angels in Poetry of Iqbal’ was translated by Dr Huma Khan, a Copenhagen-based scholar of Pakistani origin. Government of Denmark, Embassy of Pakistan in Denmark jointly held the event while diplomats from Iran and Germany especially spoke on the work of Dr Allama Iqbal.

“Iqbal proposes solutions for the dilemmas of the modern man,” said Khurram Ellahi while addressing the audiences. Mr. Sikandar Siddique, MP and Political Leader of Independent Green & Member of the Danish Parliament, welcomed a huge audience belonging from varying diasporas.

Mr. Jamshid Fatahline Jad and Mr. Reza Sohbati- Cultural Counselor of the Iranian Embassy in Denmark, demonstrated the devotion of Iran towards Iqbal and that their people hold Iqbal very close to their hearts.

Mr. Lasse Rodwald, Cultural Counselor of the German Embassy in Denmark, said that the relationship between Iqbal and Germans is inseparable. Iqbal devoted his research years in Germany and lauded the marvelous works of Goethe and Nietzsche which is also shown in his poetry, he added.

Professor Niels Christian Hvidt of Syddansk Universitet later delivered a keynote speech on “Poetry and Spirituality” highlighting Iqbal’s message of why the spiritual interpretation of the universe is so vital in the 21st century for man and how medical science has developed a keen research eye on it.

Dr. Huma Khan shared her journey of translating the book ‘Mennesket i IQBAL’s Poesi’. She shared why she took a deep dive into philosophy and Iqbal so she could introduce the mighty Iqbal to the Danish audience, despite being an accomplished doctor.

Khurram Ellahi, the author of the translated book ‘Mankind Encountering Angels in Poetry of Iqbal, shed light on how Iqbal has presented the thesis of man in front of the world in comparison with angels and how Man being the vicegerent of God is created to do wonders and miracles.

Mr. Ahmad Farooq, Ambassador of Pakistan in Denmark, in his note of thanks, expressed gratitude to the guests and urged for joint efforts as such efforts bridge the gap between east and the west.