Thousands of quake survivors without food, shelter in Afghanistan 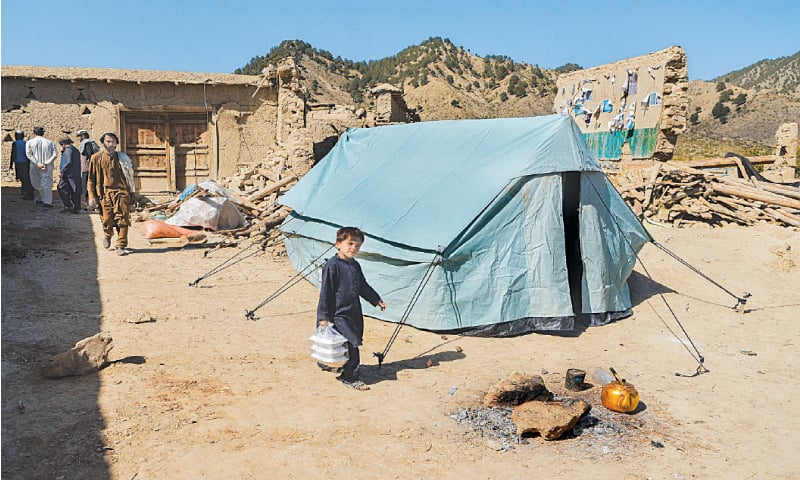 GAYAN: Aid trickled to devastated villages in remote parts of Afghanistan on Friday but thousands of people remain without food, shelter and water three days after the country’s deadliest earthquake in decades.

Wednesday’s 5.9-magnitude quake struck hardest in the rugged east along the border with Pakistan while people slept, killing more than 1,000 and leaving thousands homeless.

Entire villages have been levelled in some of the worst affected districts, where survivors said they were even struggling to find equipment to bury their dead.

“There are no blankets, tents… there’s no shelter. Our entire water distribution system is destroyed. There is literally nothing to eat,” 21-year-old Zaitullah Ghurziwal told an AFP team that reached his village in hard-hit Paktika province.

The area was still being roiled by aftershocks that were sending frightened locals scurrying from whatever shelter they had sought in badly damaged dwellings.

Aid was starting to trickle through in some areas. AFP saw seven trucks from the United Nations World Food Programme trundle into the village of Wuchkai on Fri­day morning, 24 hours after leaving Kabul, to distribute tents and emergency rations.

Communications have also been hit as the quake toppled mobile phone towers and power lines. The earthquake struck areas already suffering the effects of heavy rain, causing rockfalls and mudslides that wiped out hamlets perched precariously on mountain slopes.

Officials say nearly 10,000 houses were destroyed, an alarming number in an area where the average household size is more than 20 people.

“Seven in one room, five in the other room, four in another, and three in another have been killed in my family,” Bibi Hawa said on a hospital bed in the Paktika capital Sharan.

At Wuchkai, a cemetery on a rise overlooking the village had 11 fresh graves — all members of the same family. Save the Children said more than 118,000 children were impacted by the disaster.

“Many children are now most likely without clean drinking water, food and a safe place to sleep,” the international charity said.

UN Secretary-General Antonio Guterres said the global agency has “fully mobilised” to help. Accor­ding to his office, refugee agency UNHCR has dispatched tents, blankets and plastic sheeting; the World Food Programme has delivered food stocks for about 14,000; and the World Health Organisation has provi­ded 10 tonnes of medical supplies sufficient for 5,400 surgeries.

The ceremony was attended by NDMA chairman Lt Gen Akhter Nawaz and officials of NDMA, Ministry of Foreign Affairs.

The consignment arranged by NDMA consists of family tents and essential food items, which were dispatched through a PAF C130 aircraft.

The minister said Pakistan will continue to support Afghans during the humanitarian crisis. He said relevant authorities at the Ministry of Foreign Affairs, NDMA and other departments were in close contact with the Afghan authorities for the transportation of relief goods.

It may be mentioned that the first NDMA consignment of relief goods was sent on June 23.