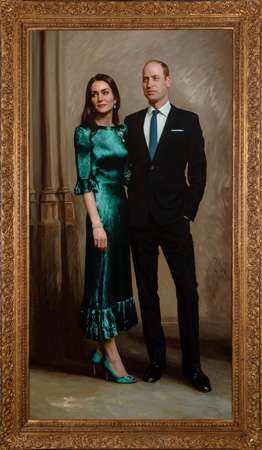 Prince William and Kate Middleton, the Duke and Duchess of Cambridge and key members of the British royal family, got their portrait unveiled at Cambridge’s Fitzwilliam Museum on Thursday. The portrait has been done by award-winning artist Jamie Coreth, and according to The Independent, it was commissioned in 2021 by the Cambridgeshire Royal Portrait Fund as a gift to Cambridgeshire. In the full-length portrait, the duke and duchess stand together and appear to be looking at the distance, with their arms around each other’s waist. They have a soft expression on their faces with Kate showing just a hint of a smile. Interestingly, the duchess is seen wearing a beautiful brooch comprising a large pearl surrounded by diamonds, and a second smaller pearl hanging like a teardrop. It is said that the accessory dates back to the 19th century, when it was crafted by a London-based jeweller, Garrard, to honour Princess Augusta of Hesse-Kessel, who became Duchess of Cambridge after marrying Prince Adolphus, the Duke of Cambridge, at Buckingham Palace in 1818, the Independent report states.