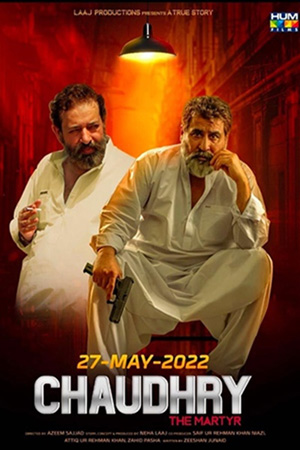 It is rightly said that music and songs play the backbone of any movie. In olden times, it was only the songs that brought people to cinemas. The team of Chaudhry has made it possible for us and brought the songs from best singers of the modern era together. If you have paid close attention to the movie teaser and theatrical trailer and the songs released so far of the upcoming action biopic, so you must have noticed that the film has a perfect amalgamation of the best singers of not only Pakistani entertainment industry but also from the neighbour country.

Chaudhry is directed by Azeem Sajjad and Co-directed and produced by Neha Laaj under the banner of LAAJ Productions. Story of the movie is penned by Zeeshan Junaid and comprises a promising cast including some of the bigwigs of Pakistan’s entertainment industry Sana Fakhar, Yasir Hussain, Nawal Saeed, Sohail Sameer, Jia Ali, Arbaz Khan, Saleem Mairaj, Shamoon Abbasi and others. With striking similarity to the real life Chaudhry, DSP Tariq Islam a serving police officer is playing the Lead role in the biopic.

Director of Chaudhry a well-known figure Azeem Sajjad and Co-Director & Producer Neha Laaj has set the bar real high by bring the best of all in one power packed package and we would like to appreciate the team of Chaudhry for taking a different and difficult route. The complete package contains all genres of songs from qawwali to folk to a sizzling item number too.

As far as the songs released by the movie so far, we have heard a melodious qawwali Nazar-e-Karam from the maestro Ustad Rahat Fateh Ali Khan.

Combining all these power-packed songs in a single 120-minute movie is not less than a marvel.

Speaking about the film, Neha Laaj said, “With support of Sindh Police, we have taken every step to make this movie a success. Our coming generations should remember and honor the heroes who have made sacrifices for the motherland. The producer’s idea behind this movie was to make an international impact with Pakistani films pay tribute to our hero and everyone associated with Chaudhry has contributed towards achieving this goal. I believe in hard work and I am certain that the audience will appreciate our efforts.”

So as far as what the producer has told us about the movie. We are now definitely looking forward to Chaudhry. Laaj Productions and Hum Films released the movie on Friday on all major cinema screens across Pakistan.