Afghan quake survivors without food and shelter as aid trickles in

* Entire villages levelled in some of worst affected districts, where survivors say they were even struggling to find equipment to bury their dead 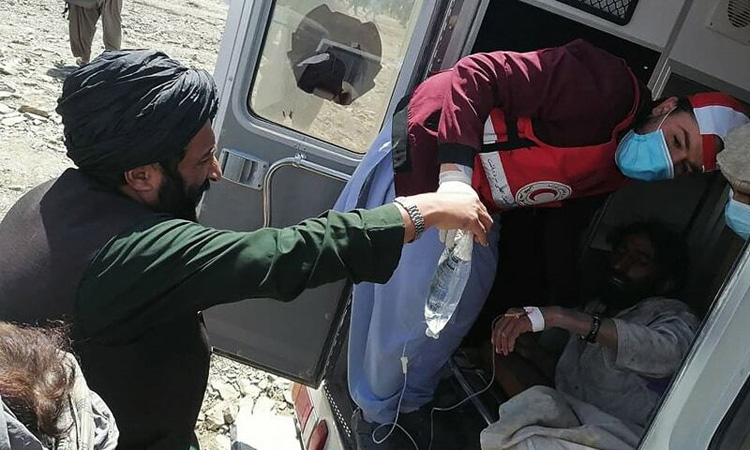 Aid trickled to devastated villages in remote parts of Afghanistan Friday but thousands of people remain with little food, shelter and water three days after the country’s deadliest earthquake in decades.

Wednesday’s 5.9-magnitude quake struck hardest in the rugged east along the border with Pakistan, as people slept, killing more than 1,000 and leaving thousands more homeless. Entire villages have been levelled in some of the worst affected districts, where survivors said they were even struggling to find equipment to bury their dead.

“The tents, food and flour we have received for a few days are not enough,” said Raqim Jan, 23, near the ruins of his home in Gayan district. “Currently, it’s summer, it’s too hot. In two months it will be winter, and we will face severe cold. If they could repair the roofs and houses, that would be the most helpful.” The area was still being roiled by aftershocks that were sending frightened locals scurrying from whatever shelter they had sought in badly damaged dwellings. One aftershock early Friday killed five people, according to Maqbool Luqmanzai, director of health in Gayan district.

Aid was starting to trickle through in some areas. AFP saw seven trucks from the United Nations World Food Programme trundle into the village of Wuchkai Friday morning, 24 hours after leaving Kabul, to distribute tents and emergency rations.

Communications have also been hit as the quake toppled mobile phone towers and power lines. The earthquake struck areas already suffering the effects of heavy rain, causing rockfalls and mudslides that wiped out hamlets perched precariously on mountain slopes. Officials say nearly 10,000 houses were destroyed, an alarming number in an area where the average household size is more than 20 people. “Seven in one room, five in the other room, four in another, and three in another have been killed in my family,” Bibi Hawa told AFP from a hospital bed in the Paktika capital Sharan.

At Wuchkai, a cemetery on a rise overlooking the village had 11 fresh graves — all members of the same family.

Save the Children said more than 118,000 children were impacted by the disaster. “Many children are now most likely without clean drinking water, food and a safe place to sleep,” the international charity said.

The disaster poses a huge logistical challenge for the Taliban government, which has isolated itself from much of the world by introducing hardline Islamic rule.

The aid-dependent country saw the bulk of its foreign assistance cut off following the Taliban takeover last August, and even before Wednesday’s disaster the United Nations warned of a humanitarian crisis that threatened the entire population.

But the quake has prompted an outpouring of sympathy from abroad — although many are wary of how any aid will be used.

“The aid distribution will be transparent,” government spokesman Bilal Karimi told AFP, adding “many countries have supported us and stood with us”. UN Secretary-General Antonio Guterres said the global agency has “fully mobilised” to help.

According to his office, refugee agency UNHCR has dispatched tents, blankets and plastic sheeting; the World Food Programme has delivered food stocks for about 14,000; and the World Health Organization has provided 10 tonnes of medical supplies sufficient for 5,400 surgeries. Afghan government officials said Thursday that aid flights had landed from Qatar and Iran, while Pakistan had sent trucks carrying tents, medical supplies and food. Even before the Taliban takeover, Afghanistan’s emergency response teams were stretched to deal with the natural disasters that frequently strike the country.

But with only a handful of airworthy planes and helicopters left since they returned to power, any immediate response to the latest catastrophe is further limited.

“We hope that the International Community & aid agencies will also help our people in this dire situation,” tweeted Anas Haqqani, a senior Taliban official.

Afghanistan is frequently hit by earthquakes, especially in the Hindu Kush mountain range, near the junction of the Eurasian and Indian tectonic plates. Afghanistan’s deadliest recent earthquake killed 5,000 in 1998 in the northeastern provinces of Takhar and Badakhshan.