‘More difficult times’ ahead for Pakistan 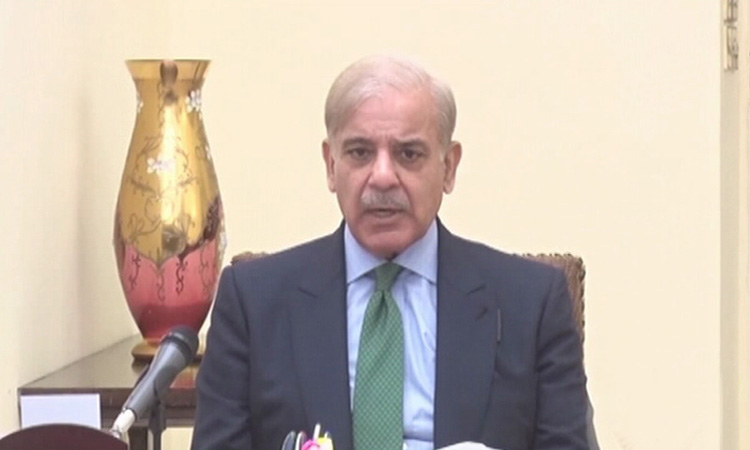 Prime Minister Shehbaz Sharif Thursday warned the nation of ‘more difficult times’ ahead, as the IMF was insisting that Pakistan fulfill all the terms of the agreement.

Addressing PML-N senators in Islamabad, he said some of his companions suggested making ‘election reforms’ and announcing the general elections but the government plans to complete its constitutional term. “We faced many challenges when I took oath as prime minister,” the premier said. He said the terms with the IMF had been finalised and the deal with the Fund will close soon. He said the IMF did not trust Pakistan because the previous government had gone back on its agreement with the institution.

He said the PTI-led government should not have agreed to the terms of the Fund if it had issues with it, adding that once an agreement was signed, it should have been enforced. “The IMF was adamant on us fulfilling all the conditions of the agreement […] it was a difficult stage and I want to say that more difficulties are to come,” he said, says a news report. The premier said the terms of the agreement with the IMF had been decided, expressing the hope that matters would be settled within the next few days. However, he warned that the situation would not improve overnight once a deal was signed.

“Will prosperity come overnight after an agreement is signed? Not at all […] we have to strengthen our financial position.”

He said that taking the nation towards prosperity was the responsibility of the government, the cabinet and state institutions. “We will have to rise above personal interests and work hard to take decisions which will make us prosper.” He said the government had provided a relief package wherein the common man would get Rs2,000 per month.

“More measures will be taken to provide relief.” He said the previous government “never felt strongly about doing anything for widows and the poor”. “They saw their defeat in March and so they lowered fuel prices,” the prime minister said, adding that they just arbitrarily made the decision. The previous government signed a petroleum levy of Rs30 with the IMF, he said.

Speaking of the lost opportunities, Shehbaz said “billions and trillions of treasures” were buried in Reko Diq “but we could not dig them out”. “This is the fault of the leadership which dealt with the matter in the wrong way,” he said.

The premier said PTI was facing scandals of gas and wheat exports. “They gave billions in subsidies, emptied the coffers, and the cartels had a field day,” he said. He went on to say that “it will do no good to look back and cry”.

Referring to the recently inked $2.3bn loan agreement with a Chinese consortium of banks, he said: “How long will China help us?” “China and Saudi Arabia must be wondering when Pakistan will stand on its own feet,” he remarked.

The prime minister said it was the need of the hour to set aside politics and put the state above everything else. “If the state survives, so will our politics.” Talking about the budget for the new fiscal year, PM Shehbaz said that ‘genuine taxes’ were being imposed on the net income of wealthy citizens.

The premier said he would address the nation in the next few days to take them onboard regarding the steps taken by the government to improve the economic situation. Reiterating his message of working together for the betterment of the country, the prime minister said nations were made through hard work, and blood, sweat and tears. “This is the approach which we have to adopt and I am ready, along with our allied parties and institutions, to work together and this make this nation prosper.”

He said in next few days, he would address the nation to take them on board regarding the steps taken by the government to improve the economic situation.

The prime minister regretted that several welfare projects launched by PM Nawaz Sharif were stopped by the PTI government. The laptop scheme was termed a “political bribe”, but the time showed that it became a source of online connectivity for the students during COVID-19 pandemic, he added.

He said Pakistan did not need a “Naya Pakistan”, but the Pakistan of Quaid-e-Azam Muhammad Ali Jinnah.

Shehbaz Sharif said the PTI regime with its negative approach damaged ties with other countries; however, the present government was taking steps to mend them for the benefit of the nation.