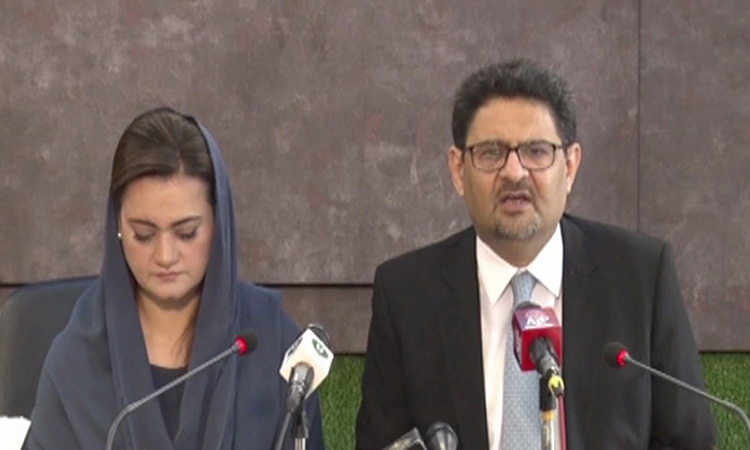 Finance Minister Miftah Ismail Thursday said the government was aware of the financial difficulties being faced by
the people due to record inflation as he defended the need to make ‘difficult decisions’ to stabilize the economy.

Addressing a press conference in Islamabad alongside Information Minister Marriyum Aurangzeb, Miftah expressed confidence that the government would be able to control the economic situation within three months. The minister said the stock market was in green whereas the exchange rate was also heading towards stability amid the imminent arrival of exchange reserves from China. He said China had agreed to provide $2.3 billion to Pakistan which would likely arrive tomorrow (Friday).

He said Imran Khan violated the agreement with the IMF, which resulted in the country’s current economic difficulties.

He said the government made a difficult decision to raise the prices of petroleum products, as it was necessary to save Pakistan from bankruptcy, says a news report.

Miftah termed the budget for the upcoming financial year ‘historic’ and said the government did not put more burden on the poorer segments of the society and instead taxed the rich to generate extra revenue.

“The previous government imposed taxes on the poor people,” he added.

Miftah said Prime Minister Shehbaz Sharif reduced the prices of flour, ghee and sugar whereas Imran could not even control the price of sugar during his four-year tenure.

“Welfare organizations foot the bill for the soup kitchens (langarkhanas),” he added.

The minister further said that the relief announced by the PM in the wake of an increase in fuel prices would benefit 80 million people.

He said Imran left a deficit of $120 billion. The government spent more money on petroleum subsidy announced by Imran ahead of his ouster via no-confidence motion, than its entire expenditure.

“If Imran Khan did not come [to the government] to keep a lid on the prices of potatoes and onions, then why did he come to power,” Miftah quipped.

He said there was nothing wrong with taxing the affluent because they were “able to pay”.

The minister said the government had decided to impose additional taxes on the rich and some industries – one of them being the sugar industry.

He added that taxes had been increased even on companies owned by the prime minister’s sons.

“Even my company will have to pay more taxes now,” Miftah said, without elaborating further.

He reiterated that Pakistan had successfully reached an understanding with the IMF over the budget.

The minister said Pakistan had a habit of taking money from other countries which had resulted in an increase in the country’s overall deficit.

“This progressive budget will diminish our dependency on loans and funds and make us truly independent.”

The finance minister said the government was forced to take tough decisions because of the economic policies of the former PTI government.

“The people who lecture us today, I want to tell them that you left the country on the brink of collapse. I have never before seen such a touch-and-go situation in Pakistan. You left behind a deficit of billions of rupees. Where was your concern for the nation then?”

“You say people should not be neutral […] you should be pro-Pakistan in that case.”

The minister went on to say that the coalition government worked day and night to bring the country out of the dire economic situation.