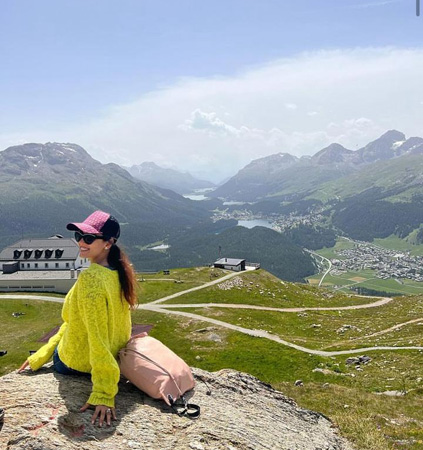 children – daughter Misha Kapoor and son Zain Kapoor – are on a Europe holiday, as per news reports.

On Tuesday, Mira shared photos from their Switzerland trip on Instagram. She shared her solo photos with valleys below and gorgeous mountains in the distance. Also featured in one of her photos was a ‘serial photobomber’ – her son Zain

In her solo photos, Mira posed with her back towards the camera. In one of the pictures, she was seen sitting and enjoying the view after a trek. She wore a bright yellow cardigan and a pair of blue jeans with black sunglasses and a cap. In another photo, Mira’s face was not visible, as she posed during mountain climbing. The mother-of-two also carried a pink backpack on the outing.

While Shahid was not captured in the trekking photos Mira shared, their son Zain made an appearance. The toddler photobombed one of Mira’s pictures, as she tried to pose atop a huge stone. It seemed like Zain, who was photographed as he looked at Mira with his back facing the camera, had a cellphone in his hand and was also clicking Mira’s pictures. Mira did not share who clicked their photo.

Earlier, on June 17, Mira took to her Instagram Stories and posted an adorable candid picture of Zain. In the photo, he was seen enjoying a snack at a birthday party, while Mira’s parents, Vikram Rajput and Bela Rajput, smiled and posed with him. Along with the photo, Mira wrote: “Co-parenting the monkeys for life.”

Meanwhile, earlier in June, Shahid performed at IIFA 2022 in Abu Dhabi. He paid a tribute to the late singer and music composer, Bappi Lahiri, at the awards function. After the 2019 film Kabir Singh, Shahid returned to the big screen with Jersey in April this year. His upcoming film is Bloody Daddy with filmmaker Ali Abbas Zafar.