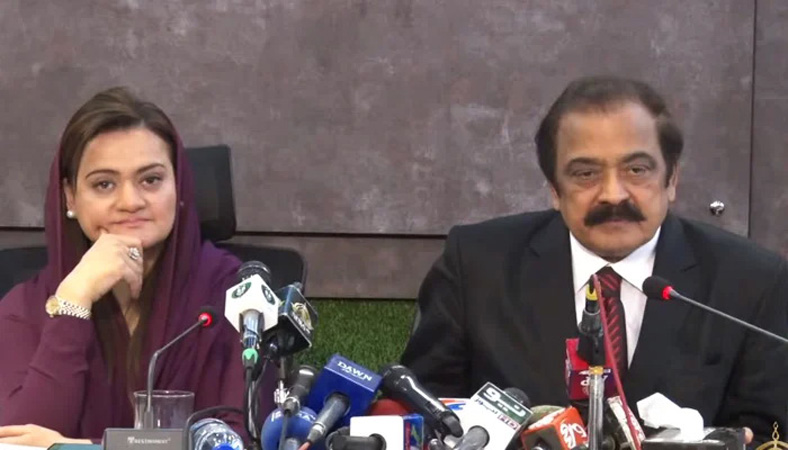 Interior Minister Rana Sanaullah Wednesday said negotiations with the outlawed Tehreek-e-Taliban Pakistan (TTP) will be held under the Constitution.

Speaking to reporters in Islamabad after attending an important meeting on national security chaired by Prime Minister Shehbaz Sharif, Sana said a detailed session was held on the security situation where the military leadership briefed the committee. The meeting of the parliamentary committee took place at the Prime Minister’s Office, where representatives from all coalition partners, security apparatus, and other officials were present.

The interior minister assured that negotiations will be held under the Constitution and peace will be secured through the talks.

Without specifying any date, the interior minister said an in-camera session of the parliament will be called to take lawmakers into confidence on the decisions related to national security, says a news report.

Meanwhile, a statement issued from the PM’s Office after the press conference stated that the institutions overseeing the national security briefed the participants on the overall security situation of the country. The meeting, according to the statement, was informed that Pakistan played a responsible and positive role for peace in Afghanistan.

“The meeting was told that Pakistan will continue its constructive role for peace and stability in Afghanistan. It also hoped that Afghanistan’s soil would not be used against Pakistan,” the statement said.

The institutions told the meeting that Islamabad fought terrorism to bring back peace to the country, which was also appreciated by the international community.

The meeting was also apprised in detail about negotiations with the TTP. It was given a briefing on the timeline of the talks – from the day they began and what has transpired till now.

The statement added that the meeting was told that the Afghan government was mediating talks with the TTP and negotiations were underway with a delegation that had members from the civil and military leadership.

“The talks are in line with the Constitution of Pakistan and the final decision will be made under the constitution and approval from the parliament,” the statement said.

The political leadership, according to the statement, expressed satisfaction over the strategy to deal with the situation.

Talking about the recent amendments to the NAB laws, Sana said ousted premier and PTI Chairman Imran Khan will benefit the most from the recent amendments to the NAB laws. He said Imran had adopted a false narrative against the amendments. “If some reforms have been made to the NAB laws, these would benefit Imran Khan, former Punjab chief minister Usman Buzdar and Farah Gogi,” Sana said. He was accompanied by Federal Minister for Information and Broadcasting Marriyum Aurangzeb. The minister said 85 percent of the amendments were passed through three ordinances during the PTI government. He said the duration of remand had been reduced from 90 days to just 14 days.

“This will benefit you, Farah Gogi and her husband Ahsan Jameel Gujjar. Farah and Gujjar were allowed entry into the Prime Minister’s House as family members and no record of their arrival in the PM house exists,” he said. “I categorically said 10 days ago that Imran had returned Rs50b to Malik Riaz which should have been deposited into the national exchequer,” he said. The interior minister also claimed that the PTI chairman received Rs5b as his commission and Rs2b for his front man Shahzad Akbar.

“Imran Khan bought 240 kanal land in the name of Farah Gogi. How was this land transferred in her [Farah] name?” he asked. He said 458 kanal land for Al Qadir University was transferred from Bahria Town to the trust and during the same days Malik Riaz was returned Rs50b. He said during the last over three years, there were no changes to the NAB laws, but Khan failed to prove anything against the opposition leaders.

“What you couldn’t prove in three and half or four years, why are you crying hoarse now?” He said Imran Khan wanted to hire retired sessions judges on the perks and privileges enjoyed by the high court judges and use them to further his agenda of victimization.

He said the changes to the remand and bail procedure had been made in light of the recommendations of courts. Is it wrong if the burden of proof has been shifted to the NAB? If NAB is arresting someone and putting them in jail, then it should prove the case against the accused.” The minister said under the new amendments, courts had been empowered to grant bails.

“Earlier, people were arrested and dumped for 90 days and even after three-month remand, no charge sheet was presented. This will not happen anymore.” He added that Khan had been using Khurram Dastgir’s statement to prove that he was removed for pursuing accountability cases against the opposition leader. If he was removed for this reason, then what about his US-backed conspiracy narrative, Sanaullah asked.