Opp feared I will appoint Faiz as next army chief 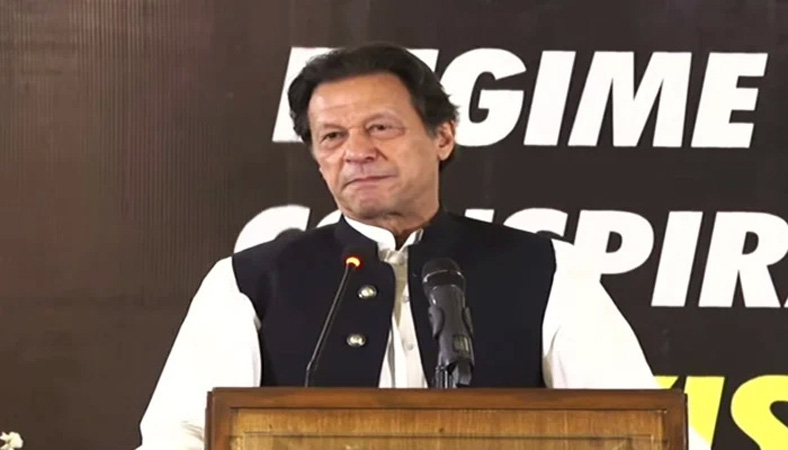 Former prime minister and PTI chief Imran Khan Wednesday said the PPP and PML-N feared that he would appoint General Faiz Ahmed as the next army chief.

Addressing a seminar in Islamabad organized by the PTI, Imran said he would have appointed the army chief on merit because he had never violated merit since his captaincy days. “These people were speculating that Imran Khan wanted to appoint an army chief of his choice so he can stay in power for a longer period like 15 years or more.”

Imran said people spreading these rumors should have considered if he had appointed a new army, had it stopped the process of accountability against them. “Actually, they wanted to appoint the army chief of their choice so they could get relief from accountability,” Imran Khan claimed. “I never thought, even once, about appointing a new army chief in November as this was not an issue,” he said.

“Allah is my witness, I say that I never thought about who will be the army chief in November. Imran Khan did not need to appoint his own army chief. I always believe in merit and if the time would have come, I would have the person on merit,” he added.

Imran said the incumbent rulers were “afraid of the army and the Inter Services Intelligence” as they know that their ‘corruption’ will be caught at some point.

The PTI chairman berated the incumbent rulers for allegedly “murdering the institutions” and appointing “their people” to every institution. Moving on to the “regime change conspiracy”, Khan said that the United States does not change regimes for a country’s betterment. It only does that for its interests, not ours, he added. He said that in the past, the United States used Pakistan for the “war on terror”, resulting in heavy casualties to Islamabad, while its air bases were also used for drone attacks.

“Our interest is that our soil is not used against Afghanistan or any other country. America wanted us to accept India’s demands. It wanted us to forget Kashmir and accept Israel,” he said. Khan said US Assistant Secretary of State for South and Central Asia Donald Lu “arrogantly threatened” Pakistan, so can a “sovereign nation” accept such threats. The PTI chairman said he was aware of the “conspiracy” to oust his government. “People ask me if I knew about it, then why didn’t I do anything? Well, I never imagined that they would appoint Shehbaz Sharif as the prime minister.” Khan, addressing the “neutrals”, said Shehbaz had been booked in corruption cases worth Rs16 billion.

The PTI chairman said the measures being taken today will lead the country toward destruction as a “circus” is going on in Punjab and the judiciary now had immense responsibility. Talking to the participants of the seminar, former finance minister Shaukat Tarin said the government was formed not for providing relief to the people, but to get the rulers “freedom from NAB (National Accountability Bureau).” In a scathing attack on the government, Tarin said it is so “incompetent” that later this month, a mini-budget is expected – after it reaches an agreement with the International Monetary Fund.

The former finance minister said there are rumours of a further Rs50 per litre hike in the price of petrol, which will exacerbate the burden on the masses – who are already getting the commodity Rs234. In his address to the seminar, PTI Senior Vice President Fawad Chaudhry said Energy Minister Khurram Dastagir has admitted in a television programme that the coalition government came into power to end their cases. “The no-confidence motion was not local, it was based on foreign agenda,” he said. Chaudhry hoped that the Supreme Court would answer the PTI’s prayer on the formation of a commission to probe the alleged foreign conspiracy.

“If you would ask me whether the regime change conspiracy has completed, my answer will be no. The regime change is still complete in Punjab,” the former information minister said. For her part, senior PTI leader Shireen Mazari said a “conspiracy” was hatched against the Khan-led government, leading to its ouster two months back. “First there was a conspiracy and then they [foreign powers] interfered,” she said, slamming the government for “proposing” talks and friendship with New Delhi.

The former human rights said after Khan’s “refusal” to give air bases to the United States, America “intensified” its “conspiracy” against the PTI chairman. “The Kashmiris are dying and our foreign minister [Bilawal Bhutto] is proposing to promote trade with India. Trade with India is America’s agenda,” the PTI leader added.