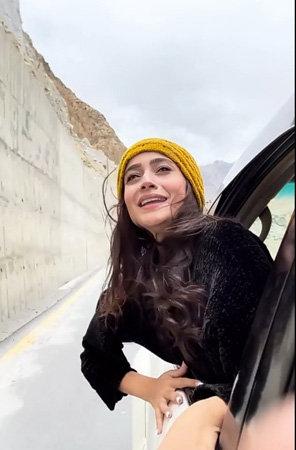 Zarnish Khan is a beautiful, charming and very popular Pakistani television actress. She is adored for her ace acting skills. She was liked for her acting in Ishq Zahe Naseeb and Sun Yara. In drama serial Jo Tu Chahay, she essayed a negative role and grabbed attention. Zarnish has been part of various hit projects so far. Her famous dramas are Ishq Zahe Naseeb, Sun Yara & Jo Tu Chahey. This time again, she posted two beautiful dance videos from Hunza in which she is dancing on popular Bollywood tunes. Her dance and act videos on Awara Bhanwara and Yeh Ishq Haey ignited severe public backlash. Fans said that she does this to fetch roles in films or to impress Bollywood producers. They also titled her as Sasti Kareena. Fans said that so called Pakistani celebrities always want to follow Hindu culture or Indian celebs. Here are the comments under her dance videos.