Govt to take more ‘tough’ decisions if need be: PM

* Shehbaz says he'll take nation into confidence after deal with IMF
* Govt protected the poor by taxing the rich in budget 2022-23
* Rs 2,000 per month to be given to 700 million deserving people 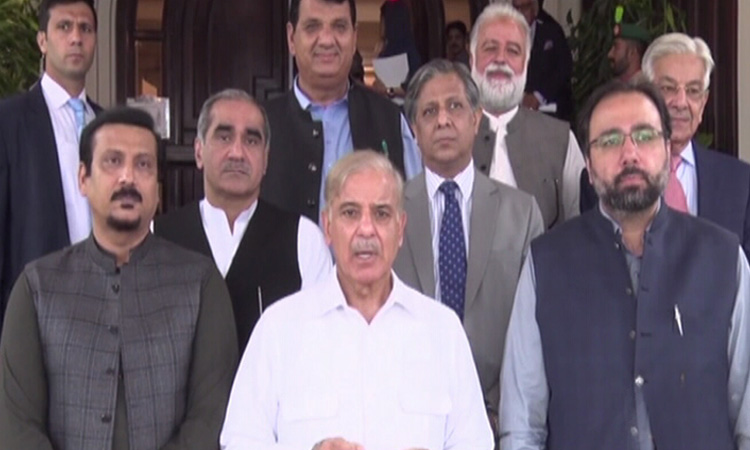 Prime Minister Shehbaz Sharif Tuesday said the coalition government was ready to take more difficult decisions if the current situation demanded so adding that the poor will be cushioned against the increasing economic burden by further taxing the rich.

Talking to journalists in Islamabad after chairing a federal cabinet meeting, Shehbaz passed the buck for the deteriorating economic conditions on to the former PTI government.

“The previous government reduced the price of petrol and laid a trap for the next government,” he said, adding that the economic conditions were worsening across the world, as commodity prices were rising. Shehbaz said the government was doling out Rs 2,000 to 700 million deserving people and had taxed the rich in the federal budget 2022-2023.

The prime minister hoped that those who were privileged would ‘happily’ support the country at this critical juncture. “The government will collect hundreds of billions of rupees in taxes through this,” he added. “The previous government did not work for betterment of the people and also breached the agreement signed with the International Monetary Fund (IMF),” he said and added that despite all the hurdles, the government will bring Pakistan out of the difficult phase.

News reports quoting sources said after the revival of the IMF program, the prime minister will take the nation into confidence on the IMF conditions and clarify that the recent hike in petroleum prices had nothing to do with the Fund.

During the cabinet meeting, Shehbaz said the government raised the prices of petroleum products in line with the rising international prices and expressed hope that the talks with the IMF will be fruitful.

Meanwhile, Prime Minister Shehbaz Sharif on Tuesday expressed his government’s strong resolve to redouble its efforts to enhance and expand bilateral cooperation with Canada in the areas of mutual interest, in particular, trade, investment, energy, health and education.

The prime minister was talking to High Commissioner for Canada Ms. Wendy Gilmour, who called on him here. During the course of their conversation, he discussed Pakistan-Canada long-standing relationship, which was marked by cordiality and friendship. While briefing the High Commissioner on government’s business friendly policies, the prime minister invited the Canadian companies to take advantage of these policies to make investment in Pakistan.

Speaking of his confidence that the Reko-Diq project would generate jobs and create economic activity especially for the people of Balochistan, he expressed the hope that Barrick Gold would soon commence its work on the site so as to begin reaping dividends from the project. The high commissioner stated that the Canadian companies would be encouraged to explore economic and investment opportunities in Pakistan. In the regional context, the prime Minister underscored the imperative of maintaining peace and stability in Afghanistan, while urging the international community to step up its efforts to avert humanitarian and economic crises in that country.

High Commissioner Gilmour conveyed her government’s deep appreciation for Pakistan’s continued cooperation with Canada, particularly with regard to evacuations in the aftermath of developments in Afghanistan post-15 August 2021.

On Ukraine, the prime minister while reaffirming Pakistan’s principled position to uphold international law and the UN Charter, urged the international community to remain engaged in the search of a peaceful resolution to the grave problem, through diplomacy and dialogue.

He also shared with the High Commissioner that Pakistan had dispatched four consignments of humanitarian aid to the people of Ukraine. Noting that there was an active Pakistani diaspora in Canada, the prime minister emphasized the importance of enhancing people-to-people contacts and high-level exchanges.

He also stressed that both countries needed to celebrate the 75th anniversary of the establishment of diplomatic ties in a befitting manner. The prime minister extended a cordial invitation to Prime Minister Justin Trudeau to undertake an early official visit to Pakistan, as it would surely contribute to enhancing Pakistan-Canada ties.