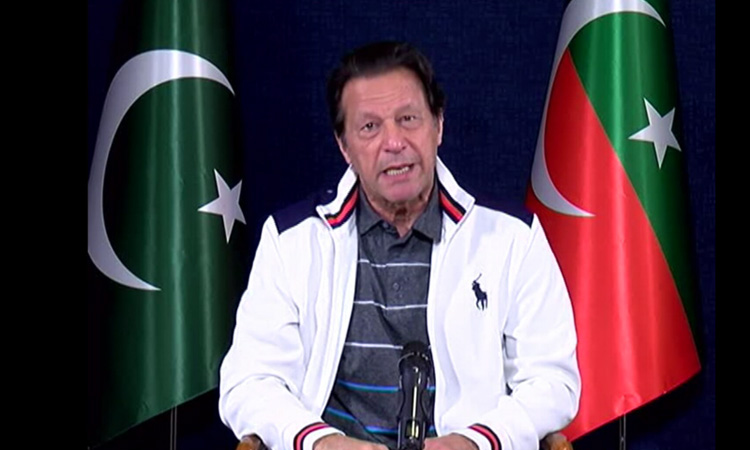 “They should be put in jail for their shamelessness. Nobody can pass such laws the way this government did,” he said while speaking during a press conference in Islamabad.

Imran announced that he will approach the Supreme Court against the NAB amendments. Explaining how the PPP and PML-N leaders will save themselves after the changes, Imran said the government had amended Section 14 of the law, which stated that a person will only be held accountable for the “money left in the fake accounts (when a person is arrested)”.

He said under the current tax laws, a person had to provide the trail of his money as the onus lay on them, not the Federal Board of Revenue (FBR).

But Khan said after the NAB law amendments, the watchdog will have to prove whether a person accumulated wealth illicitly, as the government had shifted the burden from the person to the watchdog.

The second change, Khan said was made to the “assets beyond means” – Section 9 – of the NAB law, which will provide relief to “major government leaders”.

“If I am a public office-holder earning an income of Rs50, then I will have to explain why I have assets worth Rs100 and where did I get the extra Rs50 from.

But now, they have reversed the role and the NAB will have to explain how did a public office holder get extra assets,” he said, says a news report. Furthermore, he claimed that the amendments to Section 21 had now made the information on foreign assets inadmissible meaning that PML-N supremo Nawaz Sharif and PML-N Vice President Maryam Nawaz will get “clean chits” in Avenfield case.

Imran said the government had now removed the investigation of money laundering cases from the NAB’s ambit and assigned it to the Federal Investigation Agency (FIA). “The FIA is already under the interior ministry’s control. How can we imagine that Rana Sanaullah will launch cases against Nawaz Sharif or Asif Zardari,” he added.

He said the government had also allowed people to “make money” through the Benami accounts as now they will not be held accountable for the money they make in the name of their families. “The amendments made to these laws are worse than dropping a bomb on the country,” Khan said. At the outset of his address, the former prime minister said Pakistan cannot progress with the prevalent corruption as justice was the key to a country’s development.

“Pakistan is a blessed country, but we have not reached our potential,” the ousted prime minister said. He quoted Minister for Energy Khurram Dastagir Khan as saying that the coalition government wanted Khan out of power as he was about to put the current rulers behind bars by hiring more NAB judges. Last week, during an interview with a private channel, Dastgir had admitted that the coalition government leaders knew that there would be disqualifications on a massive level by the end of this year if things continued in line with Khan’s plans.

Khan said the then-opposition constantly “blackmailed” him into giving them an NRO and they were against passing legislation to meet the demands of the Financial Action Task Force (FATF).”They walked out of the session for the passage of the bills after I declined to give them an NRO,” he said.

The PTI chairman alleged that he was pressured throughout the entire duration of his government and blackmailed to provide a National Reconciliation Ordinance-type deal to major political figures of the present coalition government but he did not give in “It should be clear now their return [to power] was not to reduce inflation.” He said if the present government remained in power then Pakistan would be on its way to a situation similar to the one in Sri Lanka. Earlier in the day, PML-N leader Shahid Khaqan Abbasi rejected the notion that the NAB reforms bill was designed with the aim to close ongoing graft cases against the party’s leadership.

“Cases against us will continue,” he said while speaking to the media outside an accountability court on Tuesday after a journalist asked him about allegations that the intention behind the legislation was to end graft cases against the country’s incumbent rulers.

He said that most of the amendments proposed to the NAB law were in fact during the PTI’s tenure and several federal ministers had admitted that these were necessary to fulfil the requirements of justice.