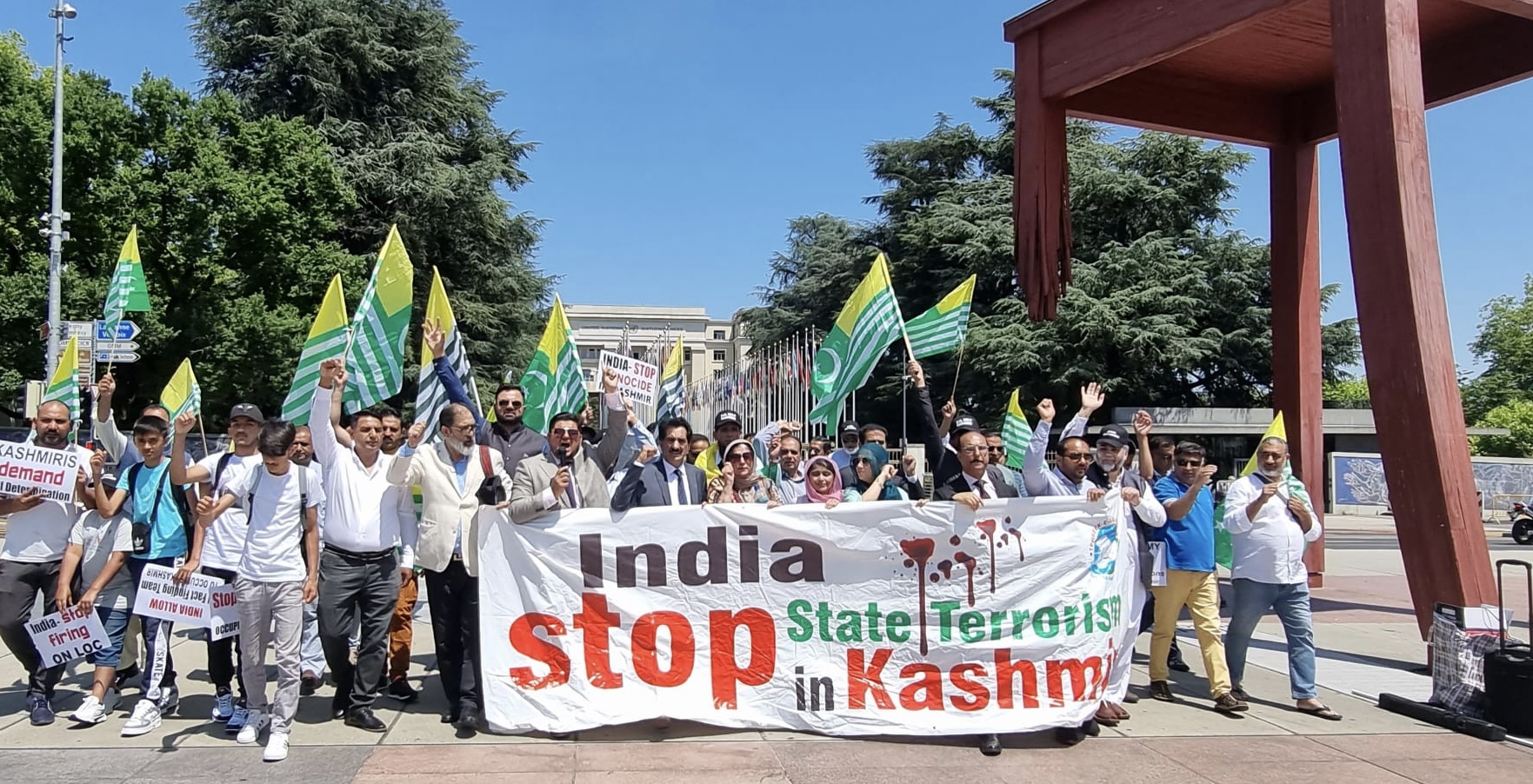 MIRPUR ( AJK ): Amid criminal silence by the international community on India’s war crimes in Indian Illegally Occupied Jammu and  Kashmir, the Kashmiri diaspora groups collaborated and came together outside the UN Human Rights office in Geneva on Monday to remind it of universal values.

Pressing the UN human rights body of speaking for voiceless Kashmiris, the Kashmiri diaspora members held demonstrations at the United Nations Human Rights Council (UNHRC) office and urged to hold India accountable for the war crimes and crimes against humanity which New Delhi was committing in Indian Illegally Occupied Jammu and Kashmir (IIOJK), says a message released to media here on Tuesday evening.

“The silence of the UNHRC on IIoJK raises questions about its credibility,” said Fahim Kayani, president of Tehreek-e-Kashmir UK, who led a joint Kashmiri diaspora group to Geneva.

Pointing to illegal abduction of the APHC leadership in IIoJK, Kayani said: “India cannot enjoy the perks and privileges of the western world where democracy and respect to human rights take precedence to any support.”

“On one side when India is trampling upon the values as espoused by the so-called international liberal order and on other hand same fascist regime in India is being given an easy passage for illegally occupying Kashmir which speaks volumes how double standards are at work,”

“The criminal silence by the human rights bodies is a slap on the mandate that the United Nations has given to the UNHRC,” said Kayani.

Referring to illegal ban on schools run under Falah-e-Aam trust (FAT), or Welfare for All Trust, Kayani said the Indian fascist regime is hell bent to devoid Kashmir youth of their religion, faith, traditions, culture and history.

“The ban on schools run by the FAT is one such attempt to keep Kashmiri youth away from the legacy which is rich in faith, tradition and struggle for a just and equal society,” said Kayani. “Education is a universal right of any human being but India has been given free hand by the western world to deny this right to Kashmiris.”

“Indian military regime is settling millions of radical Hindus in IIOJK which is complete violation of Geneva Conventions and demand that steps by the UNHRC be taken to halt Indian nefarious designs,” said Wani, adding such steps are being taken by New Delhi to “affect change in the outcome of the plebiscite which has to be held in IIoJK come what may.”

Hurriyat Leader Syed Faiz Naqshbandi “India knows this bare truth that Kashmiris in IIoJK will vote against it in UN-monitored plebiscite and that is why it wants to affect changes in the demography of the region which is illegal and violation of the international law but silence of the UN bodies makes them complicit in these crimes against humanity,”

India has, so far, refused to implement UN resolutions on IIoJK which has given Kashmiris the right to decide their political future.

Naqshbandi said the UN and its bodies must rise to the occasion and hold India accountable for these brutal acts.