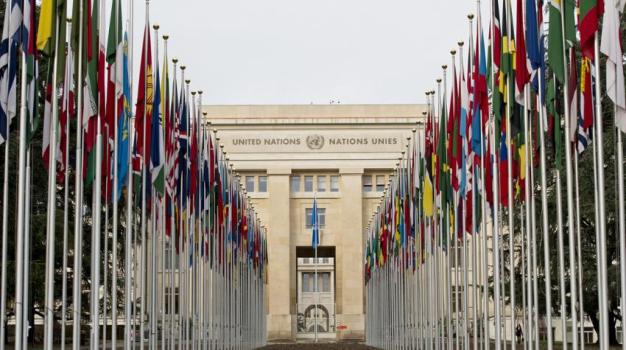 MIRPUR (AJK): The second generation young Kashmiri diaspora from across the European continent gathered in front of the United Nations in Geneva to support freedom for Kashmiris on Monday.

Scores of people from various cities in Europe and the United Kingdom (UK), including human rights activists, social workers, academicians and a large number of second-generation Kashmiri millennials living in the EU and UK unequivocally condemned the recent spree of the killing of innocent people in Indian Illegally Occupied Jammu & Kashmir (IIOJK) and urged the international community to take notice of violation of human rights, and systematic killing of Kashmiri youth in the occupied Kashmir valley, says a message reaching and released to the media here on Tuesday.

” By referring to Human Rights Council, these young people made emotional appeals that the world must understand the pain, agony and sufferings of Kashmiris.

Every other day wails of Kashmiri mothers reverberate and echoed in the valley when their sons are targeted in fake encounters and buried without the permission of performing last rites”, the message said.

“This must end – International conscience should not be so oblivious and blinded by the size of the Indian economy that it forgets the fundamentals of democracy and value system.

Protestors demanded uninterrupted access to the United Nations fact-finding mission to occupied Kashmir to assess the on-ground situation. We will stand through thick and thin with our Kashmiri brethren for their freedom and would always raise our voices against repression and occupation internationally, said a young lawyer who traveled all the way from the UK to attend this protest”, speakers categorically said.

The second generation of the Kashmiri diaspora is deeply attached to the struggle of the people of Jammu and Kashmir against Indian occupation, and their active participation is a manifestation of how millennials have taken up the freedom mission and this intergenerational shift has generated a lot of hope for Kashmiris said one of the first generation Kashmiri diaspora leader.

Protestors while speaking to the media stated that the political space has shrunk, people face severe restrictions and freedom of speech is virtually absent under the current Bhartia Janta Party regime in Kashmir.

One of the students stated that we had high expectations from the international community to hold the BJP Government accountable for human rights violations, pelleting of Kashmiris, and muzzling dissent through force. There is a deliberate effort by Indian forces to exterminate the youth of Kashmir by increasing their alienation, squeezing their social and political space thus forcing them to tread the violent paths as the last resort to resist state oppression.

People criticized the rising Islamaphobia in India and feared BJP would further fuel the fire by creating communal tensions in Kashmir to further their exclusive political ideology which is Hindu-dominated Kashmir. Demonstrators while criticizing Indian courts demanded a free and fair trial for jailed and convicted Kashmiri freedom leader, Yaseen Malik.

They also demanded the release of political prisoners including Shabir Shah, Asiya Andrabi, Masarat Alam, Naeem Ahmed Khan, Merjaudin Kalwal, Peer Saifullah Alta Ahmed Shah, and rights activists Khurum Pervaiz and Ahsan Unto and urged the international community and United Nations to intervene before it gets too late.