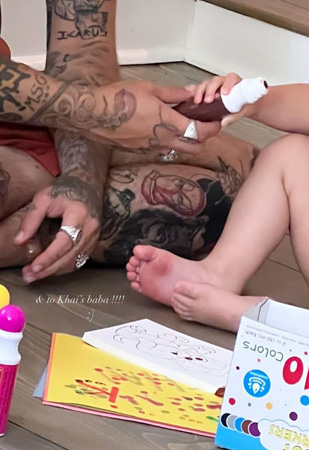 Gigi Hadid has sent the internet into an emotional meltdown as she shared a heart-warming post for ex-Zayn Malik on Father’s Day 2022.

Despite her split from the Night Changes singer, following her mother Yolanda Hadid’s altercation with him, the runway queen sent an adorable Father’s Day message to him.

Taking to her Instagram Stories, Gigi posted a never-been-seen shot of Malik, 29, and their daughter, Khai, 21 months, playing with some arts and crafts materials.

In the shared picture, neither of Malik and Khai’s faces were shown but the tattooed singer whom Gigi referred to as “Khai’s baba” was seen sitting on the floor and colouring with the toddler.

Gigi and Malik have been strict about not revealing her baby girl’s face on social media ever since her birth and continues to do so. The former couple welcomed their first child together in September 2020.

Earlier on Sunday, Gigi posted an adorable photo of herself with her father Mohamed Hadid. The black and white selfie featured their adorable bonding as he was seen giving her a kiss on the cheek

In the caption, she wrote, “Happy Father’s Day to my sweet baba. I love you!”