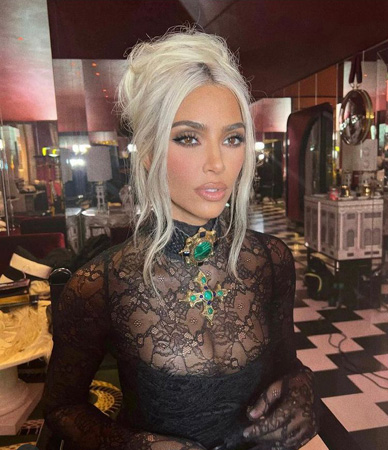 Pete Davidson and Kim Kardashian are twinning now! On May 27, the comedian made his first public appearance since signing off Saturday Night Live last weekend. The former cast member was photographed outside an office in Calabasas while wearing shower cap covering newly dyed platinum blond hair, matching his girlfriend’s locks. She was seen with him, wearing a nude SKIMS crop top and matching leggings.

Pete, 28, and Kim, 41, appeared to be at a photo shoot. Kim’s hairstylist, Chris Appleton and makeup artist, Mario Dedivanovic, were also present. Earlier this month, Kim dyed her hair blonde for the 2022 Met Gala, which she attended with Pete. The SKIMS founder channeled Marilyn Monroe, wearing her iconic crystal embellished gown, which the late Hollywood legend had worn when she serenaded late United States president John F Kennedy at his 45th birthday celebration in 1962.

Kim and Pete, both natural brunettes who have been dating since last fall, have dyed their hair blond in years past. In fact, he sported a platinum look at last year’s Met Gala.

Kim and Pete’s joint appearance this weekend comes a week after she attended her sister Kourtney Kardashian and Travis Barker’s wedding in Italy, which took place hours after Pete wrapped his last episode of SNL. He did not come along on the trip.

Kim and ex Kanye West’s daughter North West, 8, the eldest of their four children, accompanied her mom at the ceremony.

On May 27, Kim shared several photos from the wedding on her Instagram, including a sweet pic of Kourtney lovingly caressing North’s face as she walked down the aisle. Kim captioned her post, “KRAVIS FOREVER.”