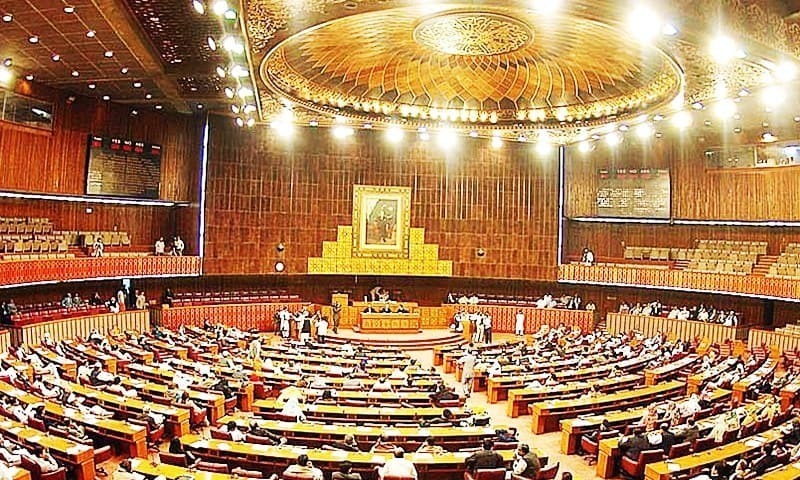 ISLAMABAD: Legislators in the National Assembly on Monday underlined the need for increasing the revenue generation by imposing taxes on the imports of luxury goods and non-productive items used by the privileged class. They asked for improving the quality of local products to meet the standards of imported items and subsequent encouragement to ‘Made in Pakistan’ brand.

Participating in debate on the Federal Budget 2022-23, Aliya Kamran of Muttahida Majlis-e-Amal Pakistan (MMAP) suggested the government to tax the luxury items and issue entry-tickets to private vehicles in congested areas of different cities. Expressing concern over growing national debts, she said heavy taxes were collected from the poor, but it was unfortunate that the privileged class got maximum benefit of the foreign loans.

Hussain Elahi of Pakistan Muslim League-Nawaz (PML-Q) expressed concern over the rising inflation and prices of petroleum products and electricity.

He said increasing trend in the prices of essential goods had made life of the common man more miserable and called upon the government to fulfil its all commitments to protect and safeguard the underprivileged segments of the society. Member National Assembly of PML-N, Tahira Bakhari said that due to maladministration and negligence of the previous government, inflation in the country touched new heights and the country ranked fourth in the world. Due to the rigidness of Imran Khan over 6 million people lost their jobs and national debt reached its highest  as compared to the debt taken during the last 70 years.

Tahira Bakhari said that the coalition government, despite the fiscal and financial constraints, had presented a balanced budget and tried to facilitate the common man in the country. She further said that all the political forces must put their collective efforts for ending the dark tenure of the last government.

The MNA also appreciated the relief measures proposed by the government for government employees and increasing the pension by 15%, asserting that it would help the inflation stricken people to meet their expenses.

In order to reduce the reliance on fossil fuel, the MNA Tahira Bukhari credited the government for withdrawing the duties on the import of solar panels, also adding that it would help to reduce energy load shedding from the country.

She also proposed the government to exempt  duties and taxes on import of infant feed and milk and other products used. She also asked for providing business opportunities for women in order to make them financially independent.

Meanwhile, she also urged the government to provide interest free loans to government employees for the construction of houses and allocating quota for women in government jobs. Nawab Sher Waseer of the Pakistan Tehreek-e-Insaf (PTI) said reforms in the agriculture sector should be introduced to increase the per acre yield of crops.

Highlighting the issue of fertiliser shortage especially when the farming community was preparing their fields for the rice crop, he asked the government to ensure provision of urea to farmers to avoid national loss as the country was already facing food security challenges.

He asked the government to table the International Monitoring Fund (IMF) agreement signed by the PTI before the Parliament. The lawmaker suggested the government provide solar panels at subsidised rates to farmers so that they could produce better results.

He requested Speaker Raja Pervaiz Ashraf to constitute a parliamentary committee on the agriculture sector to identify problems being faced by stakeholders involved in this important sector, once considered the backbone of the national economy.

Muttahida Majlis-e-Amal Pakistan (MMAP) lawmaker Muhammad Anwar said more funds should be allocated for the construction of water storages to meet needs of farmers produce electricity. He was of the view that country could effective deal with the current challenges by following the teachings of Islam in letter and spirit.

Muttahida Majlis-e-Amal Pakistan Salahuddin Ayubi commended the government for presenting a balanced budget in difficult times.  He said political instability was hurting the economy. He said all the political parties should sit together and formulate a long term economic policy for the country.