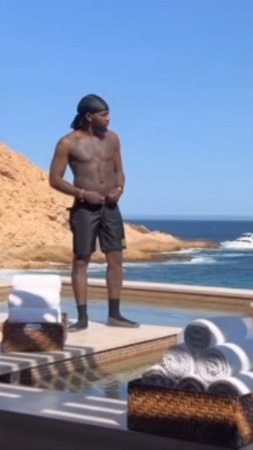 Cardi B just offered her fans a front-row seat to Titanic 2. While on vacation with husband Offset, the R&B star posted on her Twitter and Instagram Story videos of a nearby small yacht sinking into the ocean, with extra Cardi color commentary.

“It’s sinking! A whole motherf- oh my G- it’s sinking!” she exclaimed, watching the accident with the Migos rapper from a beachfront villa with a private pool. “Ya’ll see that?”

Cardi noted that “luckily, no one was in there.” She also pondered aloud if there was “a big boat that could save” the yacht, as it slowly sank near a rock.

Offset also shared footage of the yacht on his Instagram Story. “Man that s–t gonna sink,” he told his wife, who responded, “Oh my God, babe, it’s going to sink! Oh my goodness! It’s going down!”

Offset noted how expensive the yacht probably was, adding, “That s–t’s crazy. Somebody own that s–t, too…that’s a whole yacht, gone.”

Cardi and Offset had spotted the yacht just as it began to sink.

Minutes before its descent, they shared videos of the boat floating upright next to others but inching closer to the rock.

Cardi, who shares with Offset daughter Kulture Kiari Cephus, 3, and 8-month-old son Wave Set Cephus, later shared a new video of the site on her Instagram Story. “Update, ya’ll. So there’s a search team looking for the boat. I just saw like, a scuba diver went down there,” she said, chuckling. “That bitch long gone.”