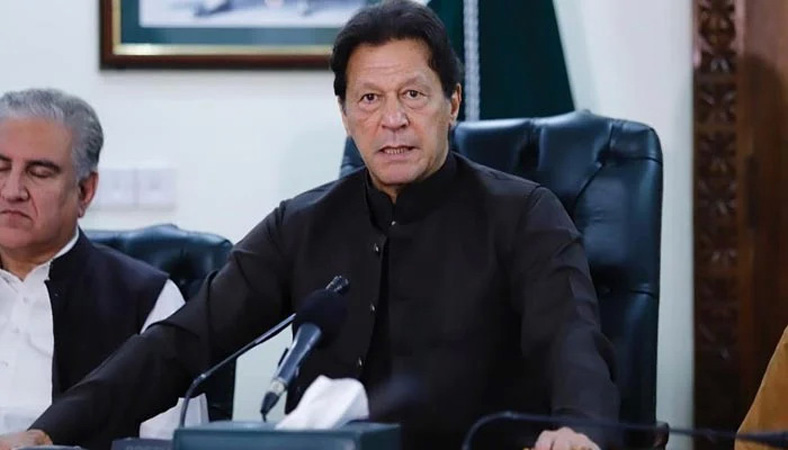 PTI Chairman Imran Khan announced Saturday he would share his future course of action in his party’s nationwide protest – slated for tomorrow (Sunday) – against rising inflation. Chairing a meeting of his party spokespersons, the former premier said that the future course of action will be decided along with the nation in today’s protest. “Oppression and force cannot stop the people from raising their voices,” he added. During the meeting, the PTI chairman congratulated the members, especially ex-energy minister Hammad Azhar, on Pakistan’s removal from the Financial Action Task Force’s (FATF) grey list. Talking about the rising prices in the country, Khan said that the PTI shielded the nation from global inflation. “The current government does not care about the people or the future of the country,” he said, adding that the “situation will be out of control if the economy was destabilised.” Khan further claimed that the “coalition government is putting the future of the nation at stake just to save themselves” and alleged that the government is destroying the institutions to keep itself in power. Former information minister Fawad Chaudhry called the people belonging to the big cities including Multan, Faisalabad, Rawalpindi, Islamabad, Lahore, Karachi and Peshawar to protest against the “high inflation and lawlessness”. Taking to Twitter, Fawad asked people to protest at Shah Abbas Chowk in Multan, Ghanta Ghar Chowk in Faisalabad, Commercial Market in Rawalpindi, F-9 Park in Islamabad, Liberty Chowk in Lahore, Shahrah-e-Qaideen in Karachi. He urged the people to protest with their families against the rising prices of petrol, diesel etc. Meanwhile, PML-N Vice President Maryam Nawaz said that Imran Khan is protesting against himself. In a statement on Twitter, Maryam said that the current government had to face the issues because of Imran Khan. “[Imran Khan] used to say that he didn’t know the rate of potato and onion while he was prime minister has suddenly remembered everything,” said Maryam.