* 'Jerrod sent it to me last night and it made me super emotional in the best way,' Pete wrote of the clip 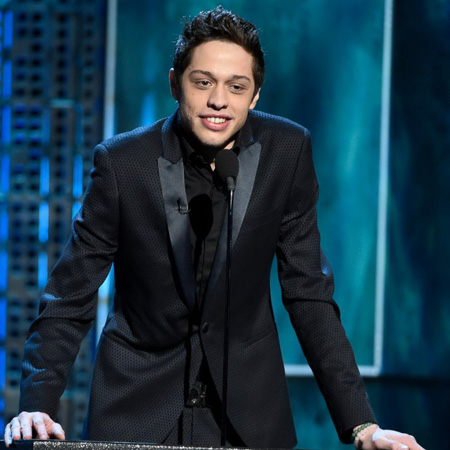 Live From New York, it’s Pete Davidson’s official Saturday Night Live departure. The comedian announced he was leaving the NBC sketch comedy show after eight years, ahead of his final appearance on the May 21 episode. Pete, who doesn’t use social media, had pal Dave Sirus post a heartfelt message and throwback video to his Instagram account featuring Pete sharing an animated hug with Jerrod Carmichael.

“Jerrod sent it to me last night and it made me super emotional in the best way,” Pete wrote of the clip. “In the video I had just gotten back from doing my very first update and sketch. It’s crazy to think that today I’ll be doing my last one.”

Pete admitted when he first joined SNL at age 20, he “had no idea” what he was doing because he “wasn’t really a sketch performer.” He said he was “scared” to be working alongside the show’s veterans like Kenan Thompson or a Kate McKinnon on “such a historic, respected show and platform.”

“I figured since I’m a stand up I’ll just try my stand up and personal bits on Weekend Update as myself and I’m so glad I did,” he continued in the message. “I got to share so much with this audience and literally grow up in front of your eyes. We were together through the good and the bad, the happiest and the darkest of times.”

Pete, 28, went on to thank the show’s creator Lorne Michaels and “everyone at SNL” saying he owes his life to them, acknowledging that he wouldn’t be where he is today without their support.

“I appreciate you guys always having my back and sticking up for me even when that wasn’t the popular opinion, he wrote. “Thank you for always believing in me and sticking by my side even when it seemed comical. Thank you for teaching me life values, how to grow up and for giving me memories that will last a lifetime.”

He concluded, “SNL is my home. I’m so happy and sad about tonight’s show. For so many reasons I can’t explain. Can’t wait to be back next year in a Mulaney musical number.

Pete’s exit comes one month after Peacock announced a straight-to-series order of Bupkis, a new comedy series which will be a fictionalized version of Pete’s real life and co-stars Edie Falco as Davidson’s mom. The Staten Island native will not only star in the show, but is also set write and executive produce.

Fans have also speculated his departure from SNL may have something to do with his relationship Kim Kardashian, who is based in Los Angeles. The pair began dating in November 2021 and made their red carpet debut at the White House Correspondents’ Dinner on April 30. Earlier this month, the pair walked the Met Gala red carpet together.

As for their future, Kim previously hinted she and Pete plan on going the distance. When asked how serious their relationship is during an interview with Robin Roberts for ABC News last month, she responded, “I mean, I am, like, a relationship kind of girl and I wouldn’t be with someone if I didn’t plan on spending a lot of my time with them.”