All the details on Kourtney Kardashian’s wedding dress 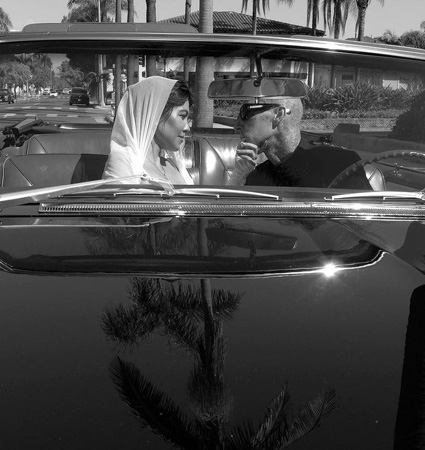 Little dress, big veil! All eyes were on the bride and her gorgeous wedding dress when Kourtney Kardashian walked down the aisle to marry Travis Barker for the third time on May 22. The Keeping Up with the Kardashians alum, 43, and Blink-182 rocker, 46, tied the knot in a breath-taking, outdoor wedding in front of their friends and family in Portofino, Italy.

At the ceremony, the bride wore a white satin Dolce & Gabbana corseted mini dress that was covered in delicate, floral lace detailing on the sides, bottom and sleeves. The design was “inspired by 1960s Italian lingerie,” per British Vogue. The soft, romantic look matched perfectly with Kourtney’s long veil, which was attached to a headband as part of the Poosh founder’s simple, yet stunning up do.

At the bottom of the veil, which stretched behind Kourtney, an image of the Virgin Mary could be seen. She was also featured on the black wedding dress that Kourtney wore while grabbing lunch with Travis, who has a head tattoo of the madonna, on May 21.

The words “Family Loyalty Respect” were also inscribed on Kourtney’s long and short veils. They are the same three words that Travis has tattooed on his forehead. To complete her look, Kourtney wore white pumps and carried a bouquet of white and red roses, which also hold a special place in Kourtney and Travis’ relationship. Kravis fans will recall that the couple were surrounded by the flowers when Travis first popped the question in Montecito, Calif., last October.

In addition to the bride, the entire Kardashian-Jenner-Barker family sported outfits from Dolce & Gabbana to the event, as did most of its guests.

Travis and Kourtney have already said “I do” twice in the last two months prior to their dreamy destination wedding. The couple first exchanged vows in a non-legally binding ceremony in Las Vegas after the Grammys on April 5. Just over a month later, the pair were legally wed at a Santa Barbara, Calif., courthouse on May 15. Kourtney’s grandma, Mary Jo “MJ” Campbell, and the Travis’ father, Randy Barker, sweetly served as witnesses for the couple on their special day.

A day after their courthouse ceremony on May 16, Kourtney posted a photo set on Instagram of her and Travis sharing a kiss in a black convertible. Attached to the car was a sign that read, “Just married.” She captioned the post, “Till death do us part.”