Hamza for enhancing ties with US in agriculture, environment sectors 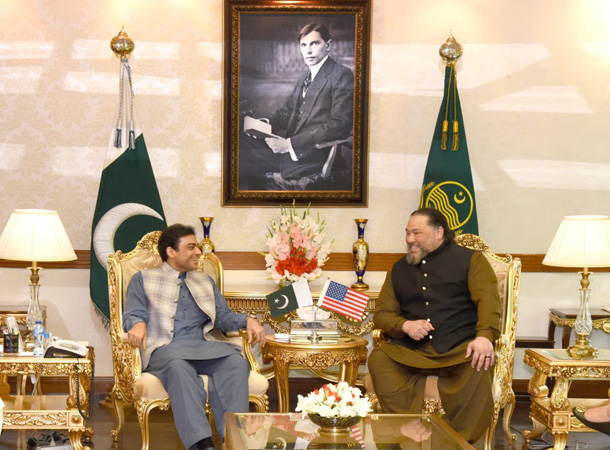 The chief minister said Pak-US relations are multifaceted in nature, adding that the Punjab government wished to further enhance bilateral relations in agriculture, environment, water-shortage and other sectors. He said: “We are faced with economic challenges currently, but our spirits are high to defeat all odds”, adding that the Pakistan Muslim League-Nawaz (PML-N) was committed to serving masses. Consul General Makaneole said that his country gives great importance to its relations with Pakistan, adding that it would further enhance cooperation in different sectors with the Punjab government.

The CM directed to present a plan of action within three days for providing kitchen items at affordable rates and made it clear that easing the economic burden was his top priority. The government was cognizant of the common man’s difficulties due to inflation and field visits must be regularly conducted to stabilize the availability of vegetables and price stabilization, he said. The deputy commissioners and price control magistrates should ensure the availability of essential items at fixed rates and the DCs should personally monitor the auction processes in the markets. Similarly, the verified data of field visits should be uploaded to the dashboard while ensuring synchronization in field visits and the relevant data details; he added and made it clear that the officers failing to conduct field visits would have to be answerable as he was personally monitoring every step taken for price control. Rs.200 billion subsidy was given for subsidized flour and every penny should reach the common man, he said.

The CM announced to provide quality healthcare and educational facilities in partnership with Sir Michael Barber as the government was desirous of providing quality facilities to the people while partnering with him.

The government intends to introduce revolutionary reforms and a comprehensive health and education sector plan would be devised; he said and appreciated the yeoman services rendered by Sir Michael Barber during the previous PMLN tenure. Sir Michael Barber has introduced wonderful health and education sector reforms during the chief ministership of PM Shehbaz Sharif and his experiences would be fully benefited upon to bring ease to the lives of the common man, he added. Kh Salman Rafiq, Rana Mashhood Ahmad, chief secretary, chairman P&D, administrative secretaries, Ali Raza and others attended the meeting.