Deacon Phillippe gets ready for prom 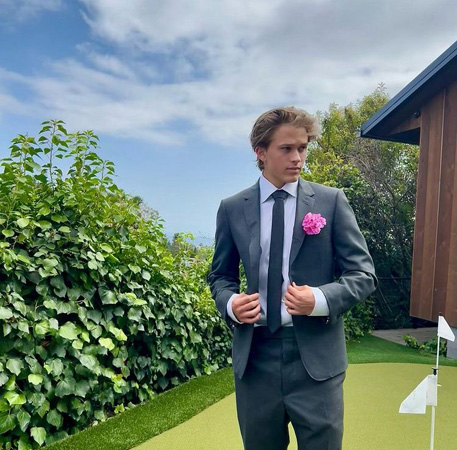 It’s prom night for Deacon Phillippe. The 18-year-old son of Reese Witherspoon and ex Ryan Phillippe suited up for the high school milestone, posting several pics to his Instagram account on May 21. “Prom anyone??,” he captioned the snaps, which included some him posing outside on a putting green in a sleek dark grey jacket and matching trousers, light-blue button-up, skinny tie and pink flower corsage. He also shared a pic alongside his dad and two friends. Reese took to the comments section to gush over the teen’s prom look, saying she loved his pink flower by way of emojis. Deacon’s older sister Ava Phillippe, 22, also commented, “looking sharp!” Later on his Instagram Story, Deacon posted a video of him trying to sink a putt before heading to prom, writing, “Prom shot was wildly unsuccessful.” Deacon’s big night comes seven months after Reese and Ryan-who finalised their divorce in 2008 after nine years of marriage-reunited at a restaurant to celebrate their youngest child’s 18th birthday. “Happy 18th birthday to our gorgeous, smart, talented and caring son,” the 47-year-old actor wrote on Instagram Oct. 23, alongside a few photos from the celebration.