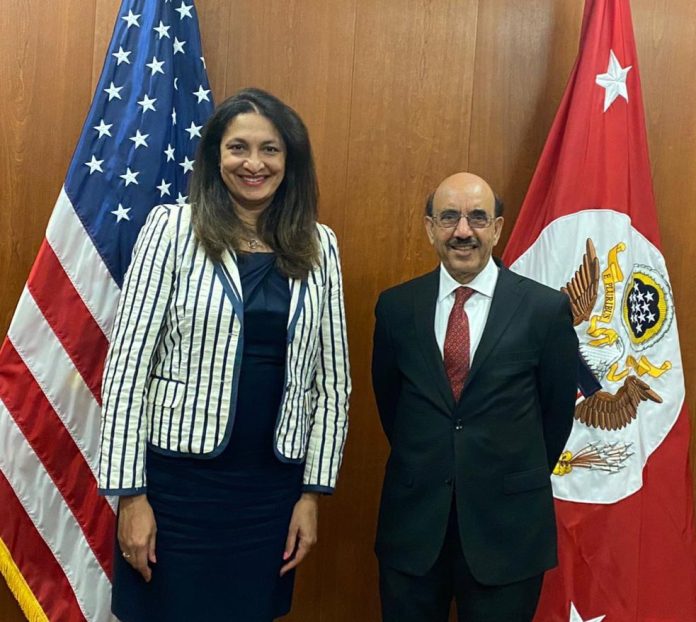 UNITED NATIONS: Pakistan’s Ambassador to the United States, Masood Khan, on Thursday discussed with  Uzra Zeya, a senior State Department official, strengthening of US-Pakistan relations “in diverse areas through frequent exchanges on issues of mutual interest”, according to a Pakistani embassy press release.

The ambassador was received “warmly” at the State Department by Ms Zeya, who is the Under Secretary of State for Civilian Security, Democracy and Human Rights, the press release said.

After the meeting, Under Secretary Zeya tweeted that she had a constructive conversation with Ambassador Khan to discuss human rights and Pakistan’s support for Afghan relocation efforts and refugees.

“I look forward to our close partnership”, she said.

Ambassador Masood Khan reciprocated the sentiment, saying the two sides would work to promote Pak-US dialogue and cooperation to forge closer ties between the two countries.

At the meeting, the Pakistani envoy also thanked the US official Under Secretary for her visit to Pakistan; and welcomed OIC-State Department’s dialogue on 23-24 May, in Washington DC, to promote dialogue between the United States and OIC nations.

Under Secretary Zeya visited Islamabad in late March to represent the United States at the OIC Council of Foreign Ministers Conference.

On that occasion, she underlined the enduring ties and partnership between Pakistan and the US. She had also commended Pakistan for offering dignity and safety to Afghan refugees for over 40 years.