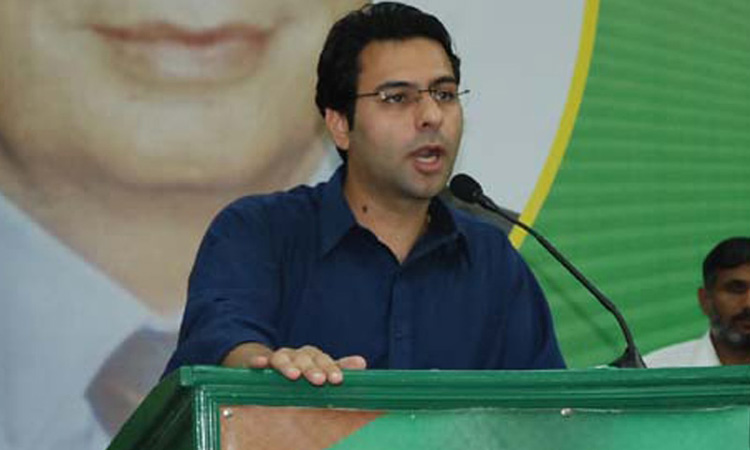 PML-Q leader and former federal minister Moonis Elahi on Thursday blamed the PML-N-led government for the registration of a money laundering case against him by the Federal Investigation Agency (FIA) and claimed that the reason for it was to “divert attention from the [provincial] budget”.

He made the remarks after a four-hour-long appearance before the FIA two days after it registered the case and initiated proceedings against him.

On Tuesday, the agency’s corporate crime circle booked Moonis, Punjab Assembly Secretary Muhammad Khan Bhatti and six others on charges of money laundering in an alleged sugar scam. The state has been named as the complainant in the first information report (FIR).

Subsequently, the PML-Q leader reached the FIA office on Lahore’s Temple Road on Wednesday evening to join the investigation. He was, however, sent back.

Earlier on Thursday, at around 8:30am, Moonis arrived at the agency’s office again. In a brief conversation, his lawyer, Amir Saeed Rawn said that the PML-Q leader will not apply for pre-arrest bail in this case. “FIA didn’t send us a notice before registering the case,” he said, adding that his client had completed legal consultations over the matter and would soon approach courts.

Talking to the media after his appearance, Elahi shared that the FIA has given him a questionnaire. He claimed, however, that the FIA’s “purpose” was not to conduct an investigation but to arrest him. He added the FIA had not issued him a notice till date and that he told the agency he would appear again if summoned. “They (PML-N-led government) did all this so attention could be diverted from the budget in the Punjab Assembly. If I tell the PML-N today that we will support you, all cases will be closed,” the PML-Q leader said.

Elahi added that all information regarding his finances was available in his tax returns.

The FIA has booked Moonis, PA secretary Bhatti, Muhammad Nawaz Bhatti, Muhammad Ali, Mazhar Abbas, Makhdoom Omar Shehryar, Tarik Jawaid and Wajid Khan Bhatti under Section 5(2) of Prevention of Corruption Act 1947 read with sections 34, 109, 420, 468, 471 of the PPC and 3/4 of the Anti-Money Laundering Act 2010 in connection with the affairs of the RYK/Alliance Sugar Mills Group. The agency has reportedly taken Nawaz and Mazhar into custody.

The FIR says the no-objection certificate for setting up the mills was issued in June 2007 when Parvez Elahi was the chief minister of Punjab, thus his “culpability will be determined during investigation”. The government has also left room in the complaint to lay hands on PA speaker Parvez Elahi later.