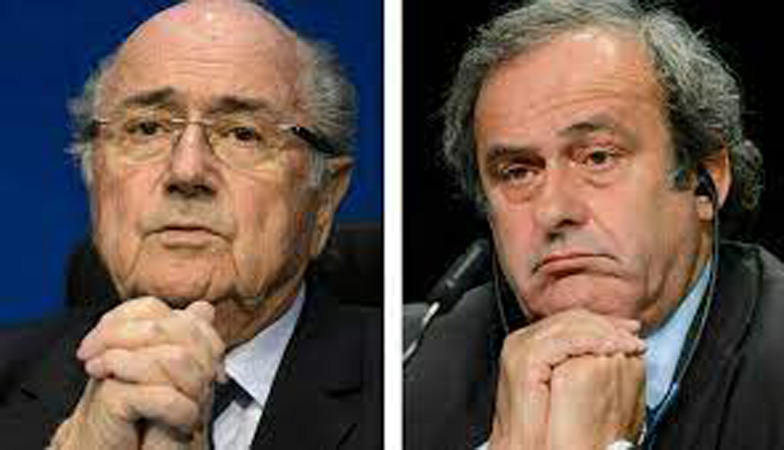 BELLINZONA: The Swiss prosecutor’s office on Wednesday demanded a 20-month suspended jail sentence for Michel Platini and ex-president of FIFA Sepp Blatter, accusing them of defrauding football’s governing body. Blatter and Platini are being tried over a two-million-Swiss-franc ($2 million) payment in 2011 to the former France captain, who by that time was in charge of European football’s governing body UEFA. The prosecutor’s demand is more lenient than he could have asked for — a maximum of five years in prison if found guilty.

“Only their behaviour with regard to criminal law counts,” said prosecutor Thomas Hildbrand, leaving out any link to football politics. The prosecution accuses Blatter of having signed off an invoice for two million Swiss francs presented to FIFA by Platini in 2011, almost nine years after the end of his work as Blatter’s adviser. Giving evidence at the start of the trial last week, Blatter said he had struck a “gentleman’s agreement” with Platini to pay him the money. Platini was employed as an adviser to Blatter between 1998 and 2002. They signed a contract in 1999 for an annual remuneration of 300,000 Swiss francs, which was paid in full by FIFA. But they claimed that they had agreed to pay an additional 700,000 annual francs when the finances of the organisation would allow it.

Hence Platini presented an invoice for two million Swiss francs at the beginning of 2011, signed by Sepp Blatter and presented to FIFA as an outstanding part of the salary. Hildbrand said on Wednesday in his four-and-a-half hour discourse that agreeing on such a sum without a written record, without witnesses and without provisioning it in the accounts was “contrary to commercial practices” as well as the habits of FIFA. He also dismissed the claim the signed invoice was for back pay arguing that FIFA’s finances were healthy enough in 1999 — it “would have had more than 21 million francs in reserves” and which had ballooned to 327 million in 2002.

Hildbrand said there was no reason for the delay, adding that Blatter “had perfect knowledge” of FIFA’s solvency. “When a chameleon feels threatened, it changes colour: Blatter does the same thing,” said Hildbrand. The trial follows an investigation that began in 2015 and lasted six years. The case is due to run until June 22 with both FIFA — a civil party in the trial — and the defence both due to lay out their closing arguments. The Federal Criminal Court of Bellinzona will deliver its decision on July 8. Platini, 66, is regarded among world football’s greatest-ever players. He won the Ballon d’Or, considered the most prestigious individual award, three times in the mid-1980s. Blatter, now 86, joined FIFA in 1975 and became the president of world football’s governing body in 1998.