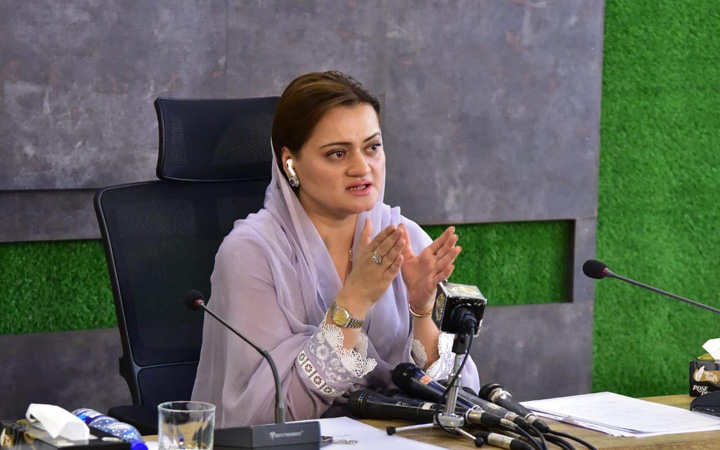 Minister for Information and Broadcasting Marriyum Aurangzeb Wednesday said ousted premier and PTI Chairman Imran Khan had himself approved the National Security Council (NSC) meeting press release adding that he had no
evidence to prove a foreign conspiracy against his government.

“Why did he approve the press release of the National Security Council (NSC) meeting if he was convinced that there was a foreign conspiracy against his government and what had barred him from presenting the evidence, if any, before the forum,” she said while addressing a news conference in Islamabad. Imran should, himself, have formed the judicial commission if he had any evidence which proved that his government was removed under a foreign conspiracy, she added. She said Imran Khan had so far failed to give any evidence to prove his claim of foreign plot against his government. He, as prime minister, himself chaired the NSC meeting and endorsed its minutes which ruled out any conspiracy against his government. The press release was a joint stance of the state and the government which was headed by Imran Khan himself, she said, adding the state could not change the official stance for the sake of his opinion and false narrative on the so-called foreign conspiracy.

The minister said the second meeting of the NSC chaired by Prime Minister Shehbaz Sharif reiterated the same stance that there was no conspiracy against the previous government. “The political and military leadership present in both the NSC meetings had only one stance i.e. no conspiracy was hatched against the Imran’s regime,” she observed. The minister said Imran Khan evolved the theory of foreign conspiracy as he knew that all files and records were littered with the tales of inefficiency and corruption of his regime. It was part of his plan to use this fake narrative of the so-called foreign conspiracy to divert attention, she added.

She regretted that the PTI leaders were attacking the state institutions at the whims of Imran Khan who wanted to divert attention of media and public from his corruption scandals. When the narrative of conspiracy failed, she said, he came up with another narrative that there was a threat to his life. Now, he has started blaming the present government for inflation which in fact was a gift of the Imran-led government.

She said real conspiracy was hatched by Imran Khan against the country by rejecting the official stance of the state on the so-called regime change plot.

Marriyum reminded Imran that he, himself, had thanked Allah Almighty and offered prayers when the no-confidence motion was moved against him. Moreover, on March 15, a US diplomat whom they later accused of conspiring against his regime was invited at the Pakistan Embassy in the US as keynote speaker at an event. “If Donald Lu was conspiring against the PTI government then why he was invited as a guest at the Pakistan embassy in Washington, she questioned. Today the PTI leaders, including Asad Umar and Shireen Mazari, briefed the media under the guidelines of Imran Khan who asked them to divert the media attention from their own misdeeds including the foreign funding case, she said.

The minister said during his four-year rule, Imran Khan did nothing but to victimize his political opponents by initiating fake cases through the NAB, FIA and other departments. When Shehbaz Sharif got bail from LHC, the PTI challenged it in the Supreme Court but when the judges asked for proof, the petition was withdrawn by PTI legal counsel Naeem Bukhari. The minister said due to incompetence, inefficiency, theft, loot and plunder of the previous government, the people of Pakistan were facing unprecedented inflation today.

“Inflation in the country today is owing to the weak foundations on which the incompetent and inefficient regime of PTI signed the IMF agreement”, she said, adding the present coalition government and Prime Minister Shehbaz Sharif were working day and night to save the people of Pakistan from inflation. The loot and plunder of the previous regime resulted only in the increase of the assets of Imran Khan and his front person Farah Gogi, she noted. Imran Khan received prohibited foreign funds, indulged in money laundering of donations and did not declare his bank accounts, she maintained. The minister remarked that when the SBP declared these accounts in the Election Commission of Pakistan (ECP), the PTI tried to attack the ECP and when any news that exposed their scandals and actions to the public, Imran Khan brought a narrative based on catastrophe and destruction.

She said Farah Gogi was Imran Khan’s front person who looted Punjab relentlessly, and if anyone talked against her, Imran Khan got furious. “During past four years, Bani Gala had become Money Gala”, as Imran Khan’s front persons followed his orders and plundered the national wealth mercilessly. Deriding the PTI for its contradictory narratives about the no-confidence motion, she said on the one hand, they stated that there was a foreign conspiracy of regime change, on the other, they claimed that they already knew about the no-confidence motion. Marriyum said even one spokesperson for the former PM Imran Khan had confessed that they laid landmines for the economy as they knew that no confidence motion would be successful. She said Imran Khan did not like that all the state institutions were on the same page and adopted a mutual position which was completely constitutional.

“His corruption scandals were surfacing everyday which showed as to how he sold the national interests in exchange for dimes.” Citing Imran’s recent corruption scandal worth Rs50 billion, she said the way he did loot and plunder was beyond the imagination of a layman. “Imran did intervene in a deal between Malik Riaz, his family and the National Crime Agency just to make a commission and sell the national interest. She said Imran’s front persons made billions of rupees in every development project implemented during the four-year rule of PTI. Commenting on Imran’s plea to the apex court seeking permission for another long march, she said he, himself, committed contempt of the court on May 25 by giving a call to his workers for reaching to the D-Chowk, Islamabad. Marriyum said Imran violated the apex court orders as he knew that it was hard for him to hold a small public gathering in a park near H-9 sector.