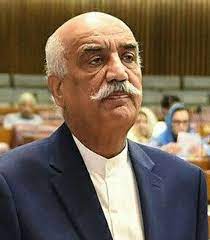 ISLAMABAD: Minister for Water Resources Syed Khursheed Ahmad Shah on Wednesday called upon members of the treasury benches in the National Assembly to ensure their presence during the ongoing budget session.

The members were called upon to make the next fiscal plan more effective for tackling the confronted economic challenges and lessen sufferings of the common man.

As the House proceedings started, Speaker Raja Pervaiz Ashraf gave the floor the minister, who expressed serious concerns over the least presence of the lawmakers especially of the treasury benches.

He urged the speaker for ensuring maximum presence of the members of the National Assembly and the federal cabinet for a thorough debate in the budget.

“This House is supreme and we have sacrificed our lives for democracy and the supremacy of the Parliament. Elected members come to this august forum from the grassroots after getting public mandate to resolve their issues,” the minister said stressing that all the members should take the matter as a paramount importance to give their input for better policy formulations.

Syed Khursheed Shah said the government had presented a balanced budget despite the severe financial constraints, adding that special measures were introduced for agriculture sector as about 81 per cent of the national economy was related with agriculture sector.

Later, the speaker suspended the House proceedings for half an hour so that maximum parliamentarians could reach by that time.