No conspiracy against PTI regime 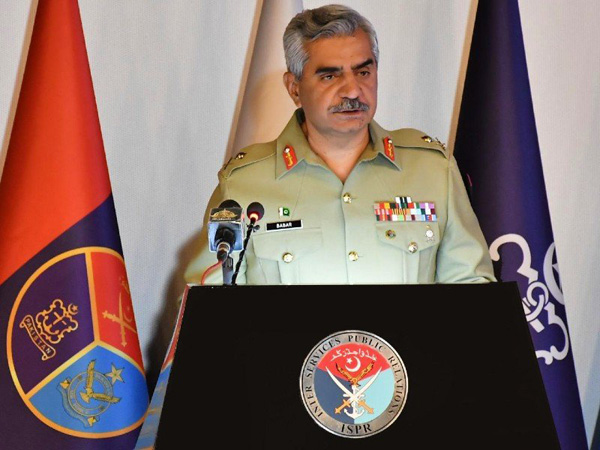 Pakistan Army on Tuesday once again reiterated its stance that no foreign conspiracy was hatched against the Imran Khan-led PTI government.

When questioned about former prime minister Imran Khan’s longstanding claim of there being a US-backed conspiracy behind his ouster, DG ISPR Major General Babar Iftikhar told a private TV channel that he had “already clarified” the matter as he proceeded to reject the claim again. Regarding the first National Security Committee meeting on the diplomatic cable at the centre of the conspiracy allegation that was held during Imran’s tenure, the DG ISPR said it was attended by top military leadership and the participants were “clearly and in detail briefed by agencies that there is no kind of conspiracy or any evidence of it”.

Asked to explain how he defined an act of interference and an act of conspiracy, Iftikhar said they were diplomatic terms and diplomats could better explain them.

The DG ISPR was also asked about “propaganda and criticism” against the army after it “distanced” itself from political affairs. He acknowledged that the army and its leadership were being targeted through “baseless rumours and propaganda which is very unfortunate and shouldn’t happen”. He said that everyone was entitled to their opinion, but no one had the right to “reject facts and target an institution and its personalities on the basis of lies”.

The DG ISPR highlighted that the Chief of Army Staff General Qamar Javed Bajwa’s visit to China was very important and added that China has played a crucial role in increasing Pakistan’s defence prowess. He emphasised that ties between Islamabad and Beijing held “strategic importance” and were crucial for regional peace. He also stated that the security of the China-Pakistan Economic Corridor (CPEC) projects has remained unaffected, adding that the work related to the project’s security has been happening round the clock. He said the trip would have “far-reaching effects” that would soon be seen.

In light of former COAS Pervez Musharraf’s ailing health, DG ISPR Major General Babar Iftikhar said the military leadership believes that the former army chief should return to Pakistan. “In such a situation, the institution and leadership’s stance is that Pervez Musharraf should return,” he said, adding that the final call for the return of the ex-president – who resides in the United Arab Emirates – to Pakistan would be made by his family. “We have contacted his family. Once his family responds, we can make the required arrangements,” he said as he prayed for Musharraf’s speedy recovery.

The DG ISPR also addressed the debate on the defence budget. He said that the defence budget allocation for the fiscal year 2022-23, contrary to perception, had decreased after factors such as inflation and rupee depreciation were accounted for, and was now 2.2 per cent of the GDP from 2.8pc last year. He said there was an “annual debate” on army’s allocation following the budget, adding that the money earmarked for defence services was based on the “threat perception, challenges, deployment and the resources available”. “So [after] considering at all these things, the army hasn’t had any [net] increase in the budget since 2020,” the DG ISPR claimed.

“When you look at inflation and rupee depreciation, it (defence budget) was actually reduced. It was 2.8pc of GDP last year and now we are at 2.2pc so the budget is continuously going down in GDP terms.” He said that after factoring in this year’s inflation, the defence budget had actually taken a hit of Rs100bn. “Despite these challenges, we did not allow any shortcoming in our capabilities,” Iftikhar added. Elaborating on the measures taken by the army to curb its spending, he said instructions had been passed to conserve fuel and reduce expenditure on utilities, while Friday would be observed as a “dry day” where no official transport would be used except for emergencies. DG Iftikhar further said the army had returned to the government Rs6bn from Covid allotments and Rs3.5bn from other allotments in last year’s budget. On the Financial Action Task Force’s (FATF) plan, the DG ISPR avoided commenting on it but maintained that “New Delhi had lobbied to get Pakistan blacklisted”.

On the implementation of FATF’s points, the DG ISPR shared that the government formed a special cell in 2019. In this special cell, a coordination mechanism was formed between different department’s ministries and agencies, he added. “This special cell formulated a complete action plan and all departments, ministries and agencies implemented it. The cell worked day and night to develop an effective strategy for money laundering and terror financing, which was implemented by all departments,” said Maj Gen Ifitkhar. The DG ISPR said that because of the cell this legislation was done and Pakistan implemented FATF’s 26 points out of 27. He also added that the legislation helped Pakistan recover Rs58 billion.