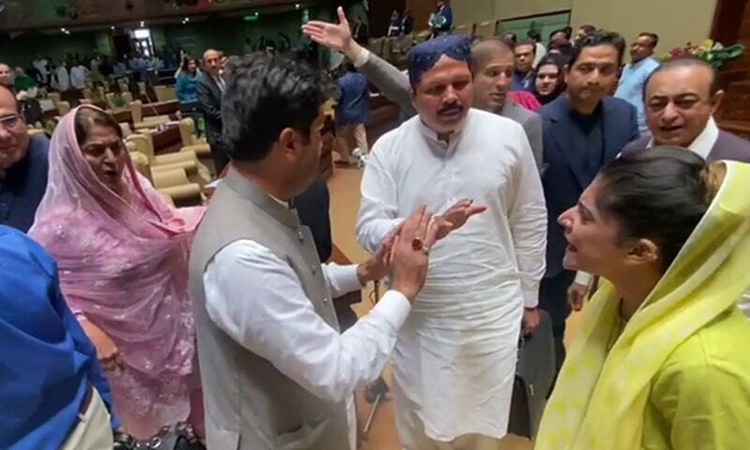 The budget session in the Sindh Assembly on Tuesday was marred due to chaos and uproar as the lawmakers belonging to the opposition’s Pakistan Tehreek-i-Insaf and the ruling Pakistan People’s Party had a brawl on the floor of the House, leading to disruption in the proceedings, a private TV channel reported. The situation took an unpleasant turn after acting Speaker Rehana Leghari allowed Chief Minister Syed Murad Ali Shah to present the budget for the year 2022-23, while the PTI members gathered in front of the speaker’s rostrum, chanting slogans against the government and terming the budget “imported”. PPP’s Kulsoom Chandio and PTI’s Dua Bhutto got physical as they were seen pushing and shoving each other before being separated by fellow parliamentarians.

The house echoed with slogans of “imported hukumat na manzoor” (imported government is unacceptable) by the PTI members. However, the provincial chief executive turned a deaf ear to the noisy protest and continued reading his budget speech. Meanwhile, MPAs from the Muttahida Qaumi Movement-Pakistan and the Grand Democratic Alliance distanced themselves from the PTI-led protest. The repeated warnings from the acting speaker to protesting lawmakers went unheeded as the ruckus continued throughout the chief minister’s speech. Leghari also warned of disciplinary proceedings against Dua Bhutto for using her mobile phone during the proceedings but in vain.

The bickering between the two sides intensified when PPP members, including Information Minister Sharjeel Inam Memon, MPAs Imdad Pitafi and Mumtaz Jakhrani asked PTI lawmakers to move away from the chief minister’s seat as the latter delivered his speech. In their bid to move the PTI members from the treasury benches, Jakhrani tore up some placards carried by the PTI legislators and tossed them at the opposition benches. As the bickering between the two sides continued, PPP’s Jakhrani and PTI’s Shahnawaz Jadoon also threw budget books at each other, forcing other legislators to separate the charged MPAs.

The female lawmakers of the opposing parties also indulged in a brawl after the session was adjourned as PPP’s Kulsoom Chandio attempted to snatch a mobile phone from PTI’s Dua Bhutto for filming the protest.

Later, TV footage confirmed that PPP legislators Kulsoom Chandio and Munawwar Wassan forcibly took the phone from the PTI lawmaker. The PTI MPAs approached a nearby police station to lodge a First Information Report against the alleged snatching of Bhutto’s cellphone. However, no case was registered as the PTI MPAs claimed that the SHO was not present at the police station. Chandio, in a video message hours after the session, claimed that the PTI members had actually “snatched” her mobile phone after the session was adjourned.