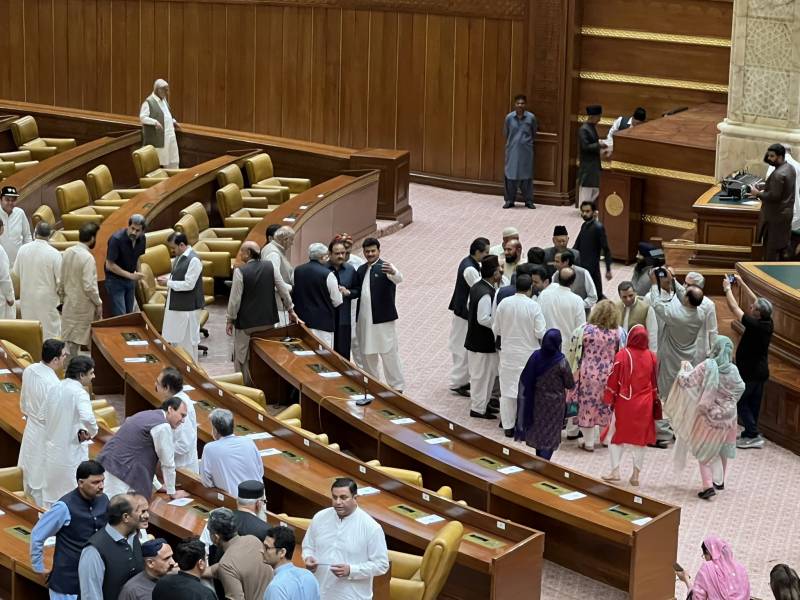 Following a stalemate in negotiations between the government and the opposition, a number of PML-N leaders and provincial ministers have proposed postponing the budget session until the next month.

The Punjab Assembly session, which was called at 1 pm today (Tuesday) for the presentation of the budget, has been delayed due to the obstinacy of Speaker Pervaiz Elahi, who wants both the Inspector General of Police and the Chief Secretary to come to the Punjab Assembly and apologize for registering cases against Pakistan Tehreek-i-Insaf and Pakistan Muslim League-Q activists and leaders, as well as administrative officers to quash cases against them.

However, the Punjab government has become adamant and has decided not to yield to the speaker’s demands.

Earlier today, Punjab Chief Minister Hamza Shehbaz presided over a meeting to discuss the issue. The chief minister believed that the provincial government would not be blackmailed by Speaker Pervaiz Elahi.

The meeting decided that neither the Inspector General of Police nor the Chief Secretary would go to the Punjab Assembly to apologize. Rather, the government would consult with legal and constitutional experts to resolve this issue.

In an interview with the media, PML-N leader Rana Mashhood stated that the budget would be presented for the province’s 120 million people and that presenting and passing it through the assembly was the responsibility of the speaker and the house.

The Punjab Assembly session was called yesterday (Monday) for the presentation of the budget, but Speaker Chaudhry Pervaiz Elahi adjourned it until today (Tuesday) after making it clear that the budget would not be presented until the Punjab IGP and chief secretary appeared in the assembly to apologise to the PTI MPAs for raiding their homes and violating their families’ privacy.

When the PML-N-led Punjab government refused to summon the officials, the session was adjourned by the speaker.

Even today, a commotion is expected at the provincial assembly’s session.

The budget session, which is still stalled, was called to a halt yesterday when the speaker objected to PML-Ataullah N’s Tarar’s presence in the assembly and ordered him to leave.

However, the speaker refused to resume the session, claiming that it had been agreed in negotiations between the government and the opposition that the IGP and the chief secretary would apologise before the session began.

Later, speaking to the media, Punjab Chief Minister Hamza Shehbaz blamed the deadlock on former Prime Minister and PTI Chairman Imran Khan, as well as Punjab Assembly Speaker Chaudhry Pervaiz Elahi, accusing the latter of violating the constitution. “We will use all legal means to protect our rights,” he said.

Ataullah Tarar, speaking on the occasion, referred to both the PTI MPs and Chaudhry Pervaiz Elahi as “conspirators.”

He stated unequivocally that the opposition’s dream of humiliating the IGP and the chief secretary by forcing them to apologise to them would never come true.