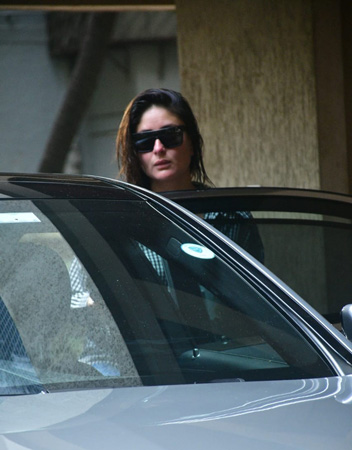 Kareena Kapoor Khan never fails to make heads turn whenever she steps out of her house.

The actress is a fashionista and there is no denying this fact. Bebo seems to be busy with her work schedule and is often spotted heading out of her house these days. Yesterday too she was snapped coming out of her building and today too she was clicked by the paps coming out of her building in a stylish outfit. Not to forget, like always she had her cup of coffee handy. In the pictures, we can see her wearing a grey coloured co-ord set. The outfit seemed perfect to wear in the scorching heat. A short kurta type top and baggy pants made the actress look stylish and comfortable at the same time. She left her hair open and wore black sunglasses. Kareena held her phone in one hand and her coffee mug in the other hand. Bebo walked in confidence as she headed out. Meanwhile, Kareena Kapoor Khan grabbed all eyeballs as the trailer of her film Laal Singh Chaddha was released. This film will also feature Aamir Khan in the lead alongside Mona Singh and Naga Chaitanya. The film is scheduled for release on 11 August 2022. Helmed by Advait Chandan, the movie is an official Bollywood remake of the Hollywood classic Forrest Gump starring Tom Hanks, which itself is based on Winston Groom’s 1986 novel of the same name. Next, will make her production debut in an as-yet-untitled thriller, in which she will also star. Touted to be a thriller film. It is said to be inspired by a real-life incident in the UK and will be helmed by Hansal Mehta.