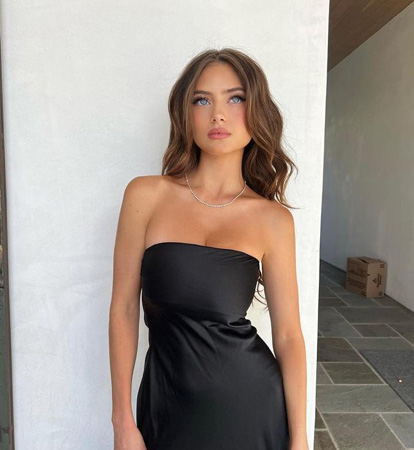 When it came time to choose her outfit for the milestone night, the 18-year-old decided to skip the mall and shopped straight from the closet of the former Project Runway host.

“prom night in mamas dress,” Leni captioned a series of Instagram snaps of herself wearing a chic strapless number on May 16. She completed the recycled look with a delicate necklace, glitzy Alexander Wang handbag and her brunette locks styled down in waves.

The knee-length, column frock appears to be the same LBD Heidi wore at an event for HBO’s Comic Relief VIII at the Radio City Music Hall in New York City in 1998. At the time, the model styled it with crystal lariat necklace and a straight, center-part hairdo.

This is hardly the first time Leni has followed in her mom’s fashionable footsteps. The teen-whose dad is Italian businessman Flavio Briatore and was raised by Heidi and her now-ex-husband Seal-made her modeling debut in December 2020, appearing on the cover of Vogue Germany’s January/February 2021 issue alongside her mom in coordinating colorful Versace outfits.

One month later, she made her runway debut during Berlin Fall/Winter 2021 Fashion Week, appearing in a digital presentation promoting several designers, including Kaviar Gauche and Michael Sontag.

“I hope that no matter where you are, you always carry what I have given you over the past 16 years,” Heidi wrote in a December 2020 Instagram post that was translated from German to English. “For the big decisions in life, but also for the very little ones. And even if you often don’t want to hear your mom’s clever advice, here’s another one: never do something you don’t want to do and always listen to your gut instinct,”

She continued, “I am sure that an exciting time is waiting for you. Vogue is the best way to start the career you dream of. And even if it is a little difficult for me to let go of you into this world, I will always do everything so that you are happy and that your dreams come true. I am proud to be your mom!”