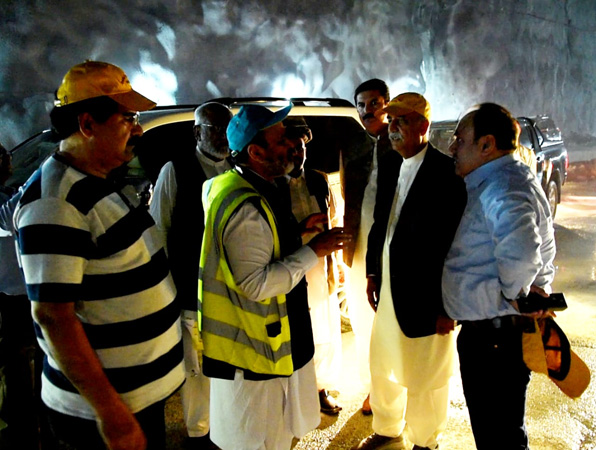 Water Resources Federal Minister Syed Khursheed Ahmed Shah has said that Dasu is a vital project to stabilize Pakistan`s economy by providing low-cast hydel electricity and triggering a new era of socio-economic development in the country.

The Federal Minister stated this today while visiting Dasu Hydropower Project, being constructed on River Indus, upstream of Dasu town in Uppar Kohistan district of Khybar Pakhtunkhwa province. He was accompanied by WAPDA Chairman Naveed Asghar Chaudhry. WAPDA project’s management and representatives of the consultants and the contractors were also present during the visit.

Speaking on the occasion, the Federal Minister said that electricity generation form Dasu Hydropower Project will commence in 2026 and tremendously contribute to cope with increasing requirement of the country by injecting sizeable cheap and green electricity to the national grid. He expressed satisfaction over pace of progress and directed WAPDA to complete the project within stipulated timeframe.

The Federal Minister also addressed the locals during the visit. He directed WAPDA that the locals be given priority in jobs on the project. A meeting will soon be convened at Islamabad with all the stakeholders to review self-managed resettlement package to address grievances of the locals, he added.

Earlier, the Federal Minister had a detailed round of the various components of the project including diversion tunnels and powerhouse complex and reviewed construction activities going on there.

WAPDA GM and PD Anwar-ul-Haq apprised the Minister that the 4320 MW- Dasu Hydropower Project is being completed in two stages. At present, WAPDA is constructing stage-I with installed generation capacity of 2160 MW and annual energy generation of 12 billion low-cost and environment-friendly electricity. The stage-II, when implemented, will also provide 9 billion units to the national grid. On completion of the both Stages, Dasu will be the project with highest annual energy generation in Pakistan i.e. 21 billion units per annum on the average. The Minister was further apprised that Rs. 17.34 billion are being spent on CBM schemes by WAPDA for economic and social development in the project area. About 3300 jobs, including 1808 for locals, have so far been created, which will increase to 8000 jobs during peak construction period of the project.