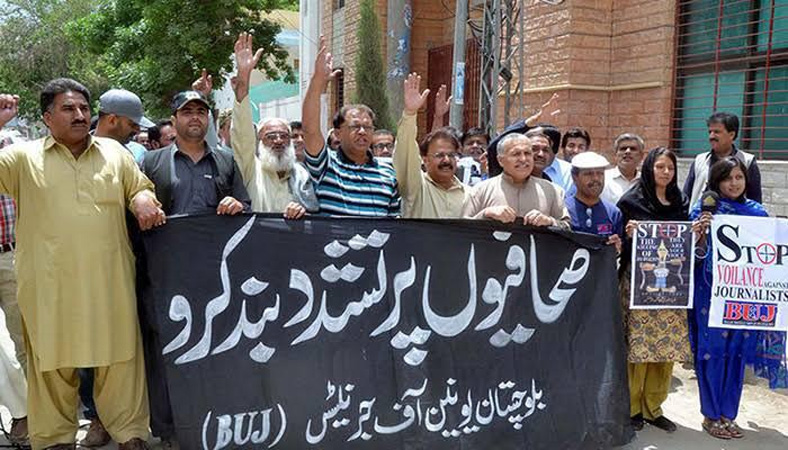 Balochistan is as distant and faraway from the rest of the country as its representation/coverage on mainstream media platforms in Pakistan. In other words, the geography and the people residing in the province matters to the same extent the way those in the upper bloc of the power corridors want them to be represented; and has been doing so. Not a single instance could prove that main stream media had covered any of the mischiefs happening to the province after each minute pause.

There is a general but intentional blackout of the political scenario on ground in Balochistan from the mainstream media of Pakistan.

The sort of blackout deviates the face of real issues in the province and Balochistan is represented with a more violent and distant place.

In a seminar in another province, I was asked by one attendee saying ‘if he visits Balochistan, will he be able to return alive’ or that ‘he won’t be unharmed.‘ I was shocked for a moment that what makes these perceptions of the province when there is a complete blackout of the political situation on ground and when there is only headlines for a high profile visiting to the province. But, and at the same time, the sort of blackout deviates the face of real issues in the province and Balochistan is represented with a more violent and distant place, never to be travelled.

To start with, Media in Balochistan contains the least prioritization of media/ journalism. The chain of media studies started in Balochistan in the last decade produces few number of students in practical fields. Students are circumscribed to bachelor’s degree with no opportunities and facilities to hold technical skills and persuade journalism in practice. There are three main universities that hold up the bachelor’s degree for communication and media studies. And only one university with MPhil to this degree, and that too with limited number of slots which is preferred to the students of its own university.

How about media houses in Balochistan? Do these media platforms hold any weight in the absence of any professional studies? First, I have my own experience working with a local TV channel for more than a year, I found that the contents and substance of these media channels hardly hold any professionalism. These media houses maintain their day to day programs with the same traditional methods of keeping neutrality and focusing issues of no importance. They rarely reflect to the situations they see and hear about on ground. Besides, the dearth of resources and no investment in infrastructure adds more to the intense situation of journalism.

Following that, Media in Balochistan is not existent. In last few years, Dawn TV, a progressive media network and 24 News channel closed down their bureaus in Quetta. 24 News laid off their employees except for a cameraperson and reporter. Dawn left its 6 employees helplessly stranded after closing down offices and asked them to work on their own. To my question what are challenges for journalists in Balochistan, reporter to VoA and member of journalist union of Balochistan ‘Hafeez Ullah sherani’ told that in the first place people don’t understand the importance of media in Balochistan. But when they enter to the field as media person, they witness the complexities of issues on ground and the limitations they receive while covering news from across the provinces. These limitations range from sectarian militancy, Baloch insurgency, and tribal warfare to the issues concerning Balochistan in international arena of politics. Sherani further says that each of the stakeholder of the province demands filtered news. On my question whether the sort of force that limits their reporting is visible, he argued that “these forces are both visible and nonvisible, depending on the substance of news and also those who relates to that particular news.” Besides, as a reporter to international media, he argued that “these international media focuses on any issue from the perspective of all stakeholders.”

What is Balochistan when how it should be from within is silent? Does the national media fill that gap? What sort of Balochistan the people from across the country are known to?

“Balochistan in media is equally not existent”, says ‘Syed Muzamil Shah’ (News Anchor, GNN News). The issues concerning Balochistan have never been to national media. Shah says that “the regional issues and the issues of securitization in Balochistan are never addressed in media.” On reflecting to the news on national media regarding bomb blasts and other militant acts in parts of Balochistan, Shah contends that people living outside Balochistan “are never told that why did that happen.”

Shah is of the opinion that the ignorance toward Balochistan is that “one would hardly find any Pakistani who doesn’t live in Balochistan and who knows the names of five cities of Balochistan. Because mostly they think it is FATA (newly emerged districts in KPK) or it’s the tribal areas or the same place. They can’t differentiate what FATA or any other part of this country is from Balochistan. They don’t know the ethnic makeup of Balochistan: how many Pashtuns live and how many Baloch people live there? What is the issue with Hazaras?”

Shah sees a ‘historical ignorance in the mainstream Pakistani psychology’ when it comes to discussing and understanding the agonies of Balochistan. He points to the roots of this censorship, back in the 1960s and 70s during military operations against Baloch, by saying “the state faces the uprising against the state doesn’t exist in the main stream media.” Shah maintains that when dealing with the issues of Balochistan “we don’t have any experts and veterans in journalism as well in national media which shows an analyses regarding Balochistan is not required to be made part of the national dialogues.”

“This”, in the words of Shah, “makes very mysterious and enigmatic place (Balochistan) for majority Pakistanis who have never been to Balochistan, who have never read about Balochistan, and the same goes for the mainstream media.” What could be the alternate to fill the vacuum? How about digital/New Media? (Social media) In a media-driven society where media is used as a state apparatus to shape and reshape ideologies of the masses, the case of media regarding Balochistan is quite other way. The blackout or intentional avoidance has shaped this narrative other way. Thus, the new media or digital media could be/is an alternative source that can be used to present an imagery of Balochistan and the multifaceted issues concerning the province as a whole. With both its positive and negative consequences, the use of new media can overcome the blackout on national media platforms. Besides, the easy accessibility of cell phones and the availability of internet services in some (main) districts of Balochistan makes it a bit possible comparatively to no representation at all.

What could be the alternate to fill the vacuum? How about digital/New Media? (Social media)

In a media-driven society where media is used as a state apparatus to shape and reshape ideologies of the masses, the case of media regarding Balochistan is quite other way. The blackout or intentional avoidance has shaped this narrative another way.

Thus, the new/ digital media is not followed by “Gate keeping theory” which leads to unfiltered, uncensored, and mostly fake news, misinformation and disinformation. I argue here that if these new/digital media platforms are used with the media literacy perspective, the sort of gap on national media regarding Balochistan can somehow be conquered through the outlets or pages run on social media platforms such as; Balochistan Voices, Balochistan Point, Baloch News, Bolan Tribune, and Mechid Tv etc. Likely, some journalists/analysts use the new media independently to fill the gap on their personal social media walls or their YouTube channels. This new representation could prevail that would most probably reflect to issues concerning the province and might also lead to a solution in the long run. Hence, a new understanding of the province and the grievance people hold might be built for other people of the country by the use of these new media tools.

The author is a staff member at Daily Times and can be reached at maria.nadirr5@gmail.com. She tweets at @MariaNadirr