Revolutionising jewellery for the modern woman 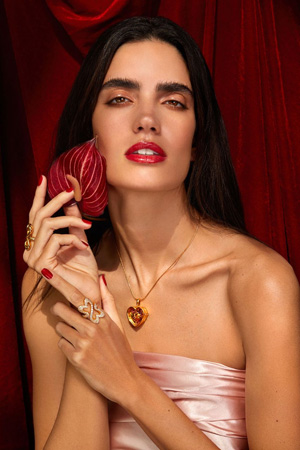 There is something very alluring about the right kind of jewellery. You can tell so much about someone’s personality depending on what type of pieces they opt for. It could be through minimalistic everyday pieces or bold and eccentric ones that can make an entire look come alive. If you’ve ever wanted to experiment with your accessories through the versatility of pieces that can morph from classic and minimal to daring and out there, the rising UK-based brand, Moushe has the perfect bijouterie for you.

Jewellery has always been a marker to enhance one’s beauty but it takes a rare visionary to create ornaments that can be worn in a wide variety of ways and make you feel nostalgic and engulfed by modernity, all at the same time. With poetic pieces perfectly crafted to suit the individual, Moushe caters to a wide audience of women who want to explore their imaginative side through accessories. The free-flowing element of all their sterling silver pieces is now available in Pakistan as the brand gets ready to make its mark as one of the most outstanding jewellers in town.

Already making waves in the UK and UAE, Moushe has been featured in several acclaimed fashion magazines including Vogue Arabia, The Glossary Magazine, Tatler Magazine and several other notable publications around the world. The jewellery line has been likened by esteemed celebrities including British singer and keyboardist Hollie Cook and was featured on the Celebrity Style and Fashion Trend e-commerce platform ‘Who What Wear’. Being distinguished in its designs is what categorizes Moushe as the brand with the most sought-after adornments for the modern individual. Its unconventional pieces are created exclusively for those who want to make a lasting impression the moment they walk into the room. Best suited for a person whose captivating personality awakens the beholder’s imagination at first glance, Moushe paves the way for the contemporary consumer who loves to personalize their look and emit their own unique aura wherever they go.

“It is not your typical conventional jewellery, instead it calls out to those in touch with their expressive side through whimsical accessories, who love to reinvent themselves each day, leaving a mark on everyone they meet. Moushe is not just about haute couture. In the world of Moushe, in fact, it could very well be a play on modern trends and in some ways, it even challenges conventional styles and norms with its abstract forms and transformative nature,” stated Founder & Creative Director of Moushe, Nabiha Sabzvari.

Moushe was developed with five key pillars in mind. Playfulness, individuality, femininity, luxury, and mindfulness are the major markers of the brand. Celebrating the individual’s eccentricities while being a celebratory homage to the modern woman with elements of luxury as well as remaining woke to the planet’s most pressing matters, the brand flourishes in diversity. The distinct jewellery pieces can be paired with one another making a minimal design all the richer with trinkets that can be added to other jewellery pieces.

The five Moushe collections include Wheel of Fortune, Bee My Honey, Sserpentine, Celestial Dreams and Moushe Love. Each of these series holds meaning and a story developed by the creative director. With marvellous structures, colourful designs and freeflow jewels, this jewellery brand never misses a beat when it comes to staying on top of trends and revolutionizing the way we see jewellery.