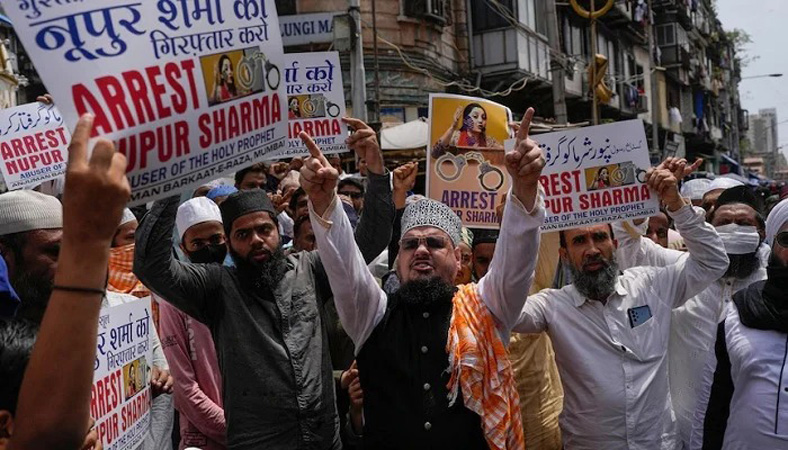 Indian police shot dead two Muslim protesters and arrested more than 130 others during street rallies sparked by a ruling party official’s remarks about the Holy Prophet Muhammad (Peace Be Upon Him), authorities told AFP on Saturday.

There have been widespread protests in the Muslim world since last week, when a spokeswoman for Indian Prime Minister Narendra Modi’s party hurled blasphemous remarks on a TV debate show.

In India and neighbouring countries, Muslims took to the streets in huge numbers after Friday prayers to condemn the remarks, with police firing on a crowd in the eastern Indian city of Ranchi.

“Police were forced to open fire to disperse protesters… resulting in the death of two,” a police officer in Ranchi told AFP.

Officers said that the crowd had defied their orders not to march from a mosque to a market and had thrown broken bottles and stones when police attempted to disperse the rally with a baton charge. Authorities cut internet connections in the city and imposed a curfew, with local resident Shabnam Ara telling AFP the atmosphere remained tense on Saturday. “We are praying for peace and harmony,” she said.

Police in Uttar Pradesh fired tear gas to disperse at least one rally after several demonstrations were staged across the northern Indian state.

Most protests ended peacefully but demonstrators in some cities threw stones at police and injured at least one officer, said Avanish Awasthi, a senior government secretary in the state.

“We will take strict action against those indulging in stone pelting and violence,” Awasthi told reporters.

Prashant Kumar, a senior police officer in the state, told AFP that up to “136 protesting miscreants” had been arrested from six districts around Uttar Pradesh. Cities around India saw sizable demonstrations on Friday, with some crowds burning effigies of Nupur Sharma — the Bharatiya Janata Party (BJP) spokeswoman whose comments set off the furore. Authorities also cut internet services for the weekend in several districts near the eastern megacity of Kolkata, after protesters blocked a railway line and mobbed a police station.

Sharma’s remarks have embroiled India in a diplomatic storm, with the governments of nearly 20 countries calling in Indian envoys for an explanation.

Since coming to power nationally in 2014, Modi’s government and the BJP have been accused of championing discriminatory policies towards followers of the Islamic faith. His government proposed a controversial law that granted citizenship to refugees in India, but not if they are Muslim, while state BJP governments have passed laws making it harder for Muslims to marry outside their religion.

The foreign ministry last week rebuked US officials for what India termed “ill-informed” and “biased” comments made during the release of a religious freedom report that accused Indian officials of supporting attacks on minority worshippers.

Sharma’s comments sent the BJP into damage control, with the party suspending her from its ranks and issuing a statement saying it respected all religions.

Friday saw the biggest South Asian street rallies yet in response to the remarks, with police estimating more than 100,000 people mobilised across Bangladesh after midday prayers. Another 5,000 people took to the streets in Lahore at the call of a radical religious party, demanding that their government take stronger action against India over the comments.

The row follows anger across the Muslim world in 2020 after French President Emmanuel Macron defended the right of a satirical magazine to publish blasphemous caricatures.