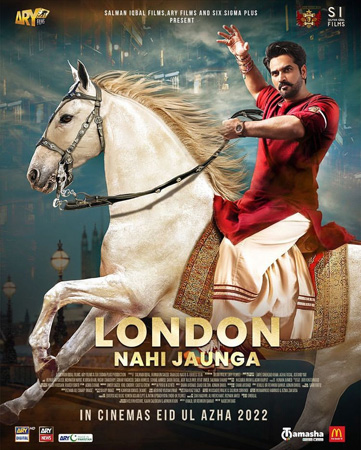 The first poster of “London Nahi Jaunga” has been released and Humayun Saeed also shared it on his Instagram on Thursday.

Sharing the poster, Saeed wrote, “Presenting the first poster of the much awaited film #LondonNahiJaunga. In Cinemas #eidulazha 2022.”

Soon after he shared the poster, his comment box was showered with the praises from the celebrities of showbiz.

Along with Saeed, the film also features Mehwish Hayat and Kubra Khan. It is shot across Pakistan, Turkey and the United Kingdom.

Earlier, Hayat while taking to her Instagram, shared a picture from the dubbing studio and wrote, “Finished dubbing for my next movie ‘London Nahi Jaunga’. See you all in the cinemas real soon! InshaAllah.”

The film is the sequel of her previous film “Punjab Nahi Jaungi”.

It is written by famous writer Khalil-ur-Rehman Qamar and directed by Nadeem Baig.

“London Nahi Jaunga” is set to be released on Eid-Ul-Azha.